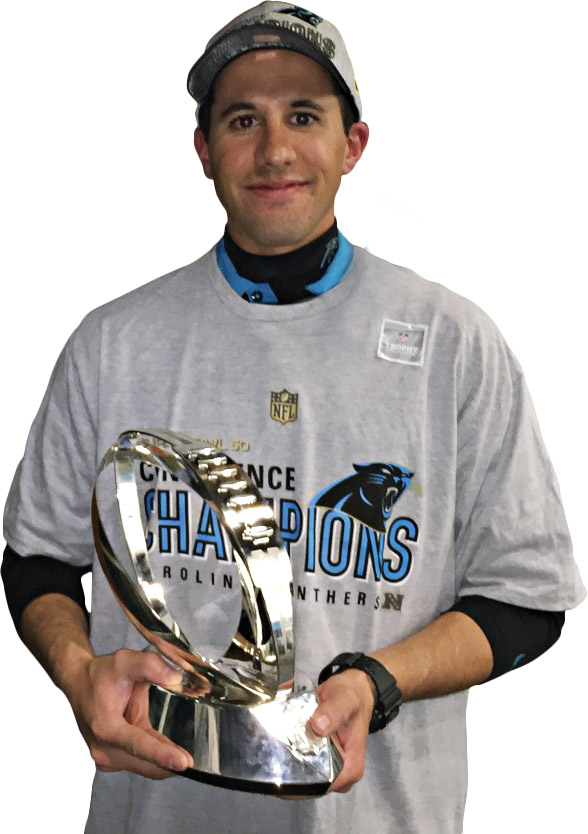 One of six athletics trainers for the Carolina Panthers, Labate joined the NFL team in April 2015. A busy 10 months later he found himself at Levi’s Stadium in Santa Clara, Calif., on the morning of the big game.

“Right after setting up the locker room I went out on the field and was standing on the 50-yard line. I looked up at the scoreboard and it had this big ‘Super Bowl 50’ sign on it,” he recalls.

“That’s when it really hit me: Everything I’d worked for had finally paid off. I was at the Super Bowl.”

Labate’s moment of reflection followed a whirlwind of work that began almost immediately after Carolina won the NFC Championship game.

“During the regular season we are only away for a couple of days, but for the Super Bowl we were gone for an entire week,” Labate explains.

“We basically had to pack up the entire athletic training room, which was stressful. But we did it.”

Labate’s road to the Super Bowl began at Cal U, where he earned his bachelor’s degree in athletic training. He credits head athletic trainer Dr. James Weary, an associate professor in the Department of Health Science, with steering him toward six-week summer training camp internships with the Cleveland Browns and Buffalo Bills.

“I’m pretty good at understanding that sometimes in life you lose, but that one stung for a couple of days,” he admits.

But being part of a Super Bowl is a thrill that lasts forever.

“That’s why I came to Cal U for athletic training. That’s why we work 14- or 15-hour days for seven months. It’s every athletic trainer’s dream to get to the Super Bowl.

“It was everything I’d ever wanted.”