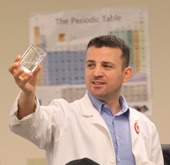 At Bucknell, I had primary teaching responsibilities in the area of engineering mathematics, engineering thermodynamics, and materials science.

At Fort Hays, I taught the two-semester sequence of physical chemistry as well as general chemistry and chemistry laboratory courses.

Dr. Sezer isa big supporter of "active learning." He sincerely believes that students learn more and have a better experience in the process if they are actively involved in their own education. As an example, general chemistry is taught in a "studio" format, where labs and lectures are integrated and supported with hands-on activities that students complete to create a much more effective learning environment.

Additionally, he has established academic collaboration ties with his faculty colleagues at Duquesne University, in Pittsburgh, which provides PennWest California students with access to advanced instrumentation.

These collaboration efforts make is possible for Dr. Sezer's students to carry out experiments using techniques such as electron microscopy and X-ray crystallography.

He is working with the Office of International Programs to develop an international dimension to these academic collaborations so PennWest California students can have access to different worlds, techniques and cultures during their time at the University.