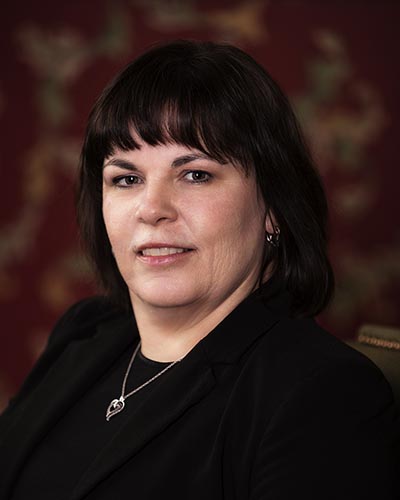 Fawn Petrosky has been a member of the President’s Cabinet since November 2009.

Petrosky began her career at PennWest California in 1988 as a fiscal assistant in the Payroll Office and was promoted to an accountant in 2003. During that time, she also held the special role of internal auditor, where she reported directly to the University President on the fiscal appropriateness and compliance of internal University affairs.

She became the assistant vice president for Finance in November 2009 and then associate vice president for Finance shortly after. In her current role, Petrosky is responsible for the oversight of the Accounting, Budget, Student Accounts and Purchasing departments. She leads the preparation of the University budget and financial statements, as well as providing oversight to all procurement and student account functions.

Petrosky is the liaison to Pennsylvania's State System of Higher Education's internal audit director for audits and is the point person for the State System's fraud line investigations. She chairs a strategic committee focused on financial aid scholarship leverage and serves on various other committees and work groups, including the Student Success committee and the Global Online & Alternative Tuition task force.

Petrosky holds both a bachelor’s and master’s degree in accounting and business administration from California University and is a Certified Public Accountant. She lives in Brownsvile, Pa., with her husband, John. While attending school here, you could often find her two daughter’s stopping in for a quick visit with “mom.”