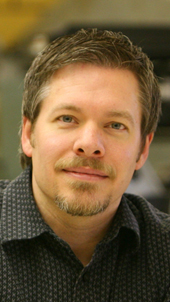 Department of Art and Languages

Jim Bové attended West Chester University in Pennsylvania where he earned his B.F.A in 1993. His teacher certification and M.F.A. in jewelry/metals was granted by Edinboro University of Pennsylvania in 1998. His work is featured in several books including "500 Necklaces,"  "The Art and Craft of Jewelry Making" and "500 Wedding Bands."

Exhibiting nationally on a regular basis, his work has also been shown internationally in Korea, Malaysia, Japan and the Dominican Republic. Jim has lectured at the internationally renowned Hiko Mizuno Jewelry College in Tokyo, Japan and for the Japan Jewelry Design Association (JJDA). In 2007 he organized an exhibition of American metalsmiths in conjunction with Hiko Mizuno Jewelry College entitled Metalsmiths Linking: A cross-cultural exchange, which opened at Gallery YU in Tokyo. His artwork has since become part of Hiko Mizuno's permanent collection in Japan.

Following this successful exhibition, Jim worked with JJDA to bring a selection of American artwork that traveled to five Japanese cities as part of JJDA's bi-annual show.

The following year he arranged and coordinated an exhibition of seventy-five Japanese metalsmiths  at the Armory Art Center in West Palm Beach, Florida.

An advocate of experiential learning, he has led groups of students on several overseas trips, including, Italy, Egypt and Japan. Domestically he organizes large group trips to the National Gallery and Smithsonian collections in Washington, D.C. and several field trips to the Pittsburgh area's top art venues.