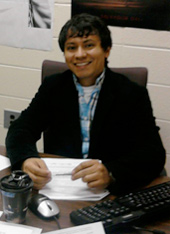 Dr. Leandro Junes has been at Cal U since 2012. Previously, he worked at the University of South Carolina for four years (2008-2012). His area of expertise is combinatorial topology.

Dr. Junes has received numerous awards -- one founded by the National Science Foundation, an "excellent teaching award" from the University of South Carolina, among others. He also organizes a national and an international conference in mathematics.

Dr. Junes is also very active in service. He serves on four committees at Cal U and has been a referee for the Journal "Discrete Mathematics."

Dr. Junes is the founder and director of three undergraduate research groups in mathematics. His students have published more than 10 original solutions in the journal "The Fibonacci Quarterly," given numerous presentations and published an article in the memoirs of a national conference. One of his students received the "Outstanding Mathematics Undergraduate Student Research Award" from the South Carolina Academy of Science in April 2012. More information.

At the Mathematical Association of America research-oriented talks in April 2013, Kasey Zemba, Courtney Killian, Marielle Silvio and Tricia Stoner gave two talks, based on solutions to open problems that were submitted to "The Fibonacci Quarterly."