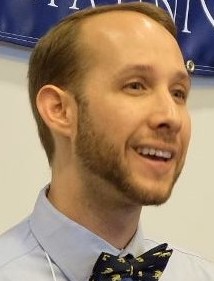 Dr. Mark Winston Visonà (he/him) is a sociolinguist who investigates real-world issues by applying theories and methods from discourse analysis and forensic linguistics. A heritage speaker of Italian and an Arabic speaker who has lived in Egypt and Kuwait,

Dr. Visonà focuses on research questions that analyze language use in its social context, especially in mediated and digital environments.

A native of  Lakewood, Colo., he trained as a videojournalist as part of his graduate work. His thesis was titled “Issue Salience of Facebook Users in Egypt: An Agenda-Setting Experiment” and showed that news stories about the environment on personal Facebook feeds influenced Egyptian undergraduate students’ perceptions of environmental issues.

After teaching undergraduate and graduate students in public relations and media convergence at AUC, Dr. Visonà worked as a middle and high school instructor of English Language Arts in Kuwait, where he briefly served as Department Head for High School English. He then returned to the United States and received a M.S. and a Ph.D. in Linguistics with a concentration in sociolinguistics from Georgetown University. He has published work on poems from the 2011 Egyptian Revolution, language attitudes in Malawi, and a review of research on Arabic as a Heritage Language.

For his dissertation reach, Dr. Visonà applied predictions from the psychological theory known as Reality Monitoring to investigate whether the linguistic features of reported speech and thought can be considered indicators of veracity or deception detection in online hotel reviews like those on TripAdvisor.com. Finding that deceivers generally use more diverse forms of both speech and thought in more standard or typical depictions of a fabricated hotel visit, he is currently developing several manuscripts for publication based on this work.

Dr. Visonà is also engaged in ongoing research with Dr. Aisulu Kulbayeva of Rice University on the discourse of emergency calls to university police, with this project examining how laypeople and call-takers can use different word forms and linguistic strategies to efficiently request or deliver emergency service. His current research interests include SWATTING calls, high-stakes interactions, and the influence of the language of online news media on audiences’ perceptions of reality.