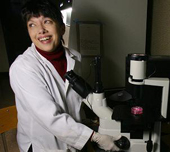 Dr. Caffrey's Ph.D. project involved studying trace elements in aquatic animals (daphnia). Her work showed a connection between the need for zinc and the need for selenium that had not been known before. Because it was such new and basic research, this work was published in the Proceedings of the National Academy of Sciences, a very prestigious journal. Her post-doctoral research began in 1989 at Rutgers University on ovarian cancer therapeutics in a research facility. After continuing post-doctoral work at the University of California-San Diego and Georgetown University, she returned to Rutgers as an assistant research associate, continuing the ovarian cancer studies. This work finally led to a clinical trial under way at the Cancer Institute of New Jersey.

Department of Chemistry and Physics at Cal U: Collaborated on a student research project using nanotechnology on cancer cells.

Dr. Caffrey is interested in discovering new ways of improving cancer chemotherapy. So far, she has shown that a common mineral found in diets, selenium, prevents ovarian tumor cells from becoming resistant to chemotherapy. This is now being studied in patients in a clinical trial. She plans to extend this to study other food ingredients and to other types of cancer such as lung cancer.

She is continuing to collaborate with the Rutgers University Department of Biological and Environmental Sciences on preventing tumor cells from becoming resistant to chemotherapy.

Dr. Caffrey has sponsored three student projects so far. One was funded in part by Commonwealth of Pennsylvania University Biologists (CPUB) to examine drug resistant tumor cells. Another was interdepartmental, applying nanotechnology to tumor cell gene transfection. This was submitted for a Pennsylvania Department of Community and Economic Development grant and was funded in part by Crystalplex, a biotech corporation. The third, ongoing project has just received funding by CPUB. It will examine cinnamon extracts as co-treatments for ovarian cancer. As with the earlier projects, these results will be presented in posters and published as CPUB abstracts in 2009.