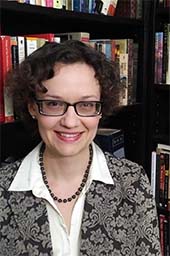 Dr. Downey grew up in Erie, Pa. Her early love of J.R.R. Tolkien's works led to a lifelong interest in language history. She studied Latin and Greek as an undergraduate at Sewanee (The University of the South), then completed a Ph.D. in Old English and Anglo-Latin at the University of Toronto's Centre for Medieval Studies. After teaching Medieval Literature and Latin language courses for four years at the University of Tennessee in Knoxville, she returned to her home state of Pennsylvania in 2009 to teach English and Linguistics at PennWest California.