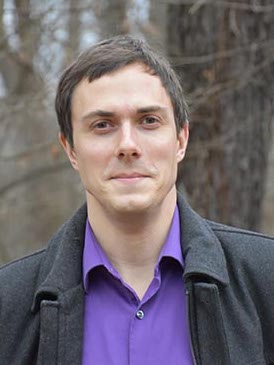 Dr. Weisgarber received his Ph.D. in astrophysics in 2012 from the University of Chicago, after which he joined a research group working on the High Altitude Water Cherenkov (HAWC) Observatory at the University of Wisconsin­–Madison. In 2018, he began teaching physics courses at UW–Madison in addition to conducting research. The following year, he joined the Cal U faculty in the Chemistry and Physics Department.

Dr. Weisgarber's research interests focus on studying objects that emit the highest energy photons, or particles of light, in the universe. As a member of the international HAWC and VERITAS collaborations, he analyzes data collected by unconventional ground-based telescopes to study blazars, a type of active galaxy with a relativistic jet of particles pointed along the line of sight to Earth, in order to learn how they produce photons with very high energies. He is also involved with the Southern Gamma-ray Wide-field Observatory (SWGO), a next-generation observatory proposed to be constructed in South America.

At the present time, Dr. Weisgarber is looking for students to work on the following research projects that may lead to presentations at regional or national conferences, or possibly even to co-authorship on a HAWC publication:

Interested students majoring or minoring in physics are highly encouraged to contact Dr. Weisgarber to discuss these opportunities.