Competition — and Camaraderie — at BotsIQ Finals 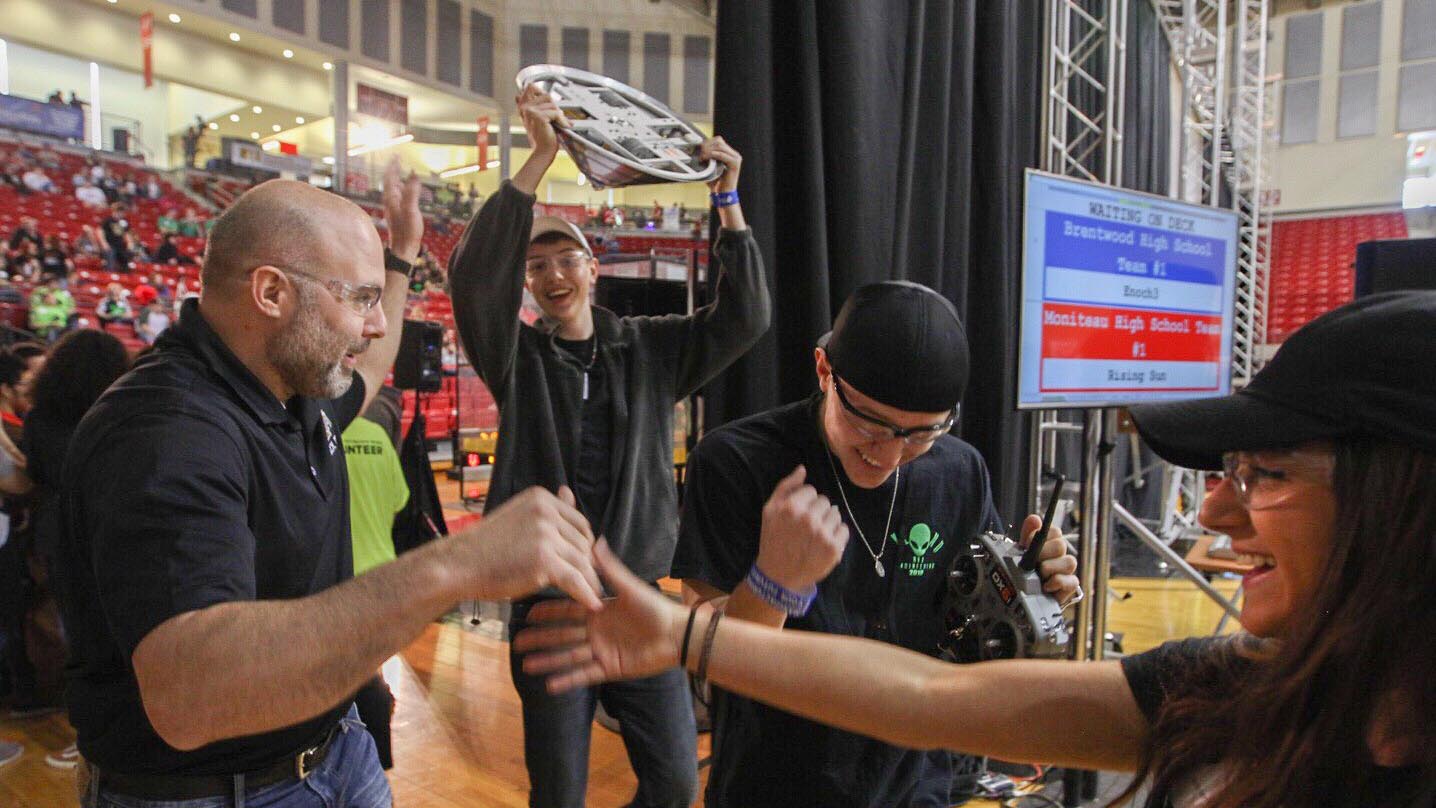 Nearly 1,000 high school students competed against — and cheered for — each other when the Southwestern Pennsylvania BotsIQ finals took place at Cal U's Convocation Center for the sixth year.

The students represented 85 teams from 62 schools in 15 different counties. In addition to the smash-'em-up robot battles, the teams also were judged on their engineering, record-keeping and interview skills.

"Coming down to these competitions is so much fun because of the environment," said Meredith Henderson, a senior at Pittsburgh Science and Technology Academy. "We are competing against each other, but we are all helping each other so we can compete against each other.

During the event's opening remarks, guest speaker Dr. Brenda Fredette, Cal U's dean of the Eberly College of Science and Technology, noted that a number of former BotsIQ competitors are now students Cal U.

"They are getting a great education and preparing themselves to stand out in the job market," Fredette said. "Cal U is proud to play a part in bringing the BotsIQ experience to our region."

Fredette also welcomed back many Cal U alumni who were in the pits and in the bleachers.

One the many returning alumni was Robert Shuber ''01, team adviser and technology education teacher at Norwin High School. He also brought some of his students to campus in March to compete with SeaPerch Underwater Robotics.

"We come down every year, and I always like it here," Shuber said. "These competitions really benefit our students because they have to come together as a team, meet deadlines, do some custom creation, compete, and make something happen as opposed to just doing some project that they will throw away.

"They have to step it up and perform."

Bill Fiedler ´02, team adviser and technology education teacher at Central Valley High School, said the BotsIQ elective he teaches has become so popular he had to divide it into two classes.

"We go to other competitions but it's not like coming here," he said of the Convocation Center. "Robotics is just going to grow, and this venue is great because it gives it the big-event feel that it is."

"It's nice, and the double arena really moves thing along," he said. "It's exhilarating because eight months of work can go by quickly, so you have to be ready and work at it."

Dr. Jennifer Wilburn, an assistant professor in Cal U's Department of Applied Engineering and Technology, said Cal U continues to enhance its special mission in science and technology by hosting many STEM-related events.

"On behalf of Cal U and Mechatronics Engineering Technology program, we are proud to be involved with events that have such a tremendously positive impact on the professionals of tomorrow," she said. "This helps to promote all facets of careers in technology and engineering in a safe, encouraging environment."

Michel Conklin made her first appearance at Cal U in role executive director of Southwestern Pennsylvania's BotsIQ.

"You can feel the excitement when you students are battling your bots, and competing is the fruit of all your hard work," she said. "We are also so glad there are so many industry professionals and teachers here to help educate and prepare all of you."

Bedford High School won the Grand Champion award, which recognizes the team with the best overall performance in competition, documentation and team interviews. See the winners

SWPA BotsIQ is managed by New Century Careers and affiliated with the National Robotics League, which holds its national competition May 18-19, also at the Convocation Center.