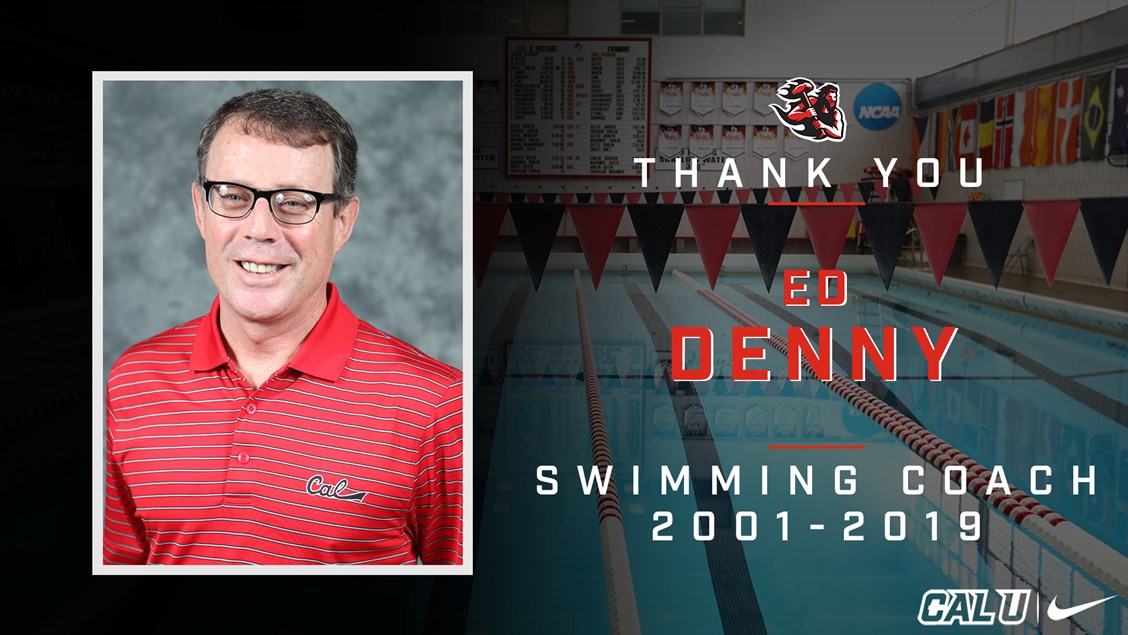 One of the longest tenured swimming coaches in the Pennsylvania State Athletic Conference (PSAC) and the initial coach in program history, Ed Denny is retiring after 18 seasons as the head swimming coach at California University of Pennsylvania.

Denny has been with the Cal U swimming program since its initial season of 2002-03 and has been an assistant coach and head coach in collegiate swimming for over three decades. Denny will continue his career in aquatics as he will be serving as the Coordinator of Competitive Aquatics and Track at the Mylan Park Aquatic Center in Morgantown, West Virginia.

"I'm forever grateful to Cal U for giving me the opportunity 18 years ago to be the first-ever women's swimming coach in program history," said Denny. "During those years, I have had the distinct pleasure to work with some outstanding student-athletes and colleagues. I hope that the student-athletes I have worked with have enjoyed the journey that we have been able to share together as much as I did."

Effective Sept. 3, April Gitzen will begin her duties as head coach of the Vulcans. Gitzen, formerly April Staniszewski, competed for the Vulcans under Denny from 2006-09.

Denny mentored over a dozen swimmers that garnered NCAA All-America honors nearly 40 combined times in 13 different events. He was instrumental in the development of three-time NCAA National Champion Melissa Gates, who was a standout from 2009-12. She earned NCAA All-America laurels 10 times during her career while winning the national title in the 50 freestyle in both 2011 and 2012, plus the 100 freestyle as a senior. Gates set three PSAC records and nine school records while being selected the 2012 PSAC Swimmer of the Year.

Gates was one of eight swimmers who captured individual league titles under Denny. Jade Arganbright claimed crowns in the 100 and 200 breaststroke at the 2017 PSAC Championships to finish her career with seven individual league titles, the most in school history. Clarissa Enslin won the 200 freestyle at the conference meet in three-straight years from 2011-13 and also captured a combined seven league titles (two relays). Gates set the PSAC Championship record in both the 50 and 100 freestyle in 2012, while also winning the 100 breaststroke and serving as the leadoff leg on the initial two championship relays in program history

Denny helped guide the Vulcans to a top-five finish in the team standings at the PSAC Championships in four-straight years from 2009-12. He was selected the PSAC Coach of the Year in 2009 after Cal U placed third at the league meet with the most points in program history just a year after finishing eighth at the event. The Vulcans also finished third at the PSAC Championships in both 2011 and 2012 while winning a combined eight league titles in those seasons.

In addition to success in the pool, Cal U consistently received CSCAA Scholar All-America status throughout his tenure. Denny also mentored a pair of CoSIDA Academic All-Americans in Enslin and Kelsey Nuhfer, who became the first student-athlete in school history to earn the honor three times. Enslin and Nuhfer both were also recipients of the NCAA postgraduate scholarship in 2014. The Vulcans were presented the PSAC Top Team GPA Award in both 2012 and 2013, the initial two years of the laurel.

Prior to Cal U, Denny served as head coach of the men's and women's swimming teams at Fairmont State while the school was transitioning from NAIA to NCAA Division II. The Fighting Falcons featured the men's 200 butterfly NAIA National Champion in 1995 and the women's team recorded an 11th-place finish at the 1999 NCAA Championships.

Denny also spent multiple years as an assistant coach at both the U.S. Naval Academy and U.S. Military Academy early in his career.

Denny placed third in the 1500 freestyle at the 1978 National Junior Olympics before finishing 13th overall in the event at the 1980 U.S. Olympic Trials.