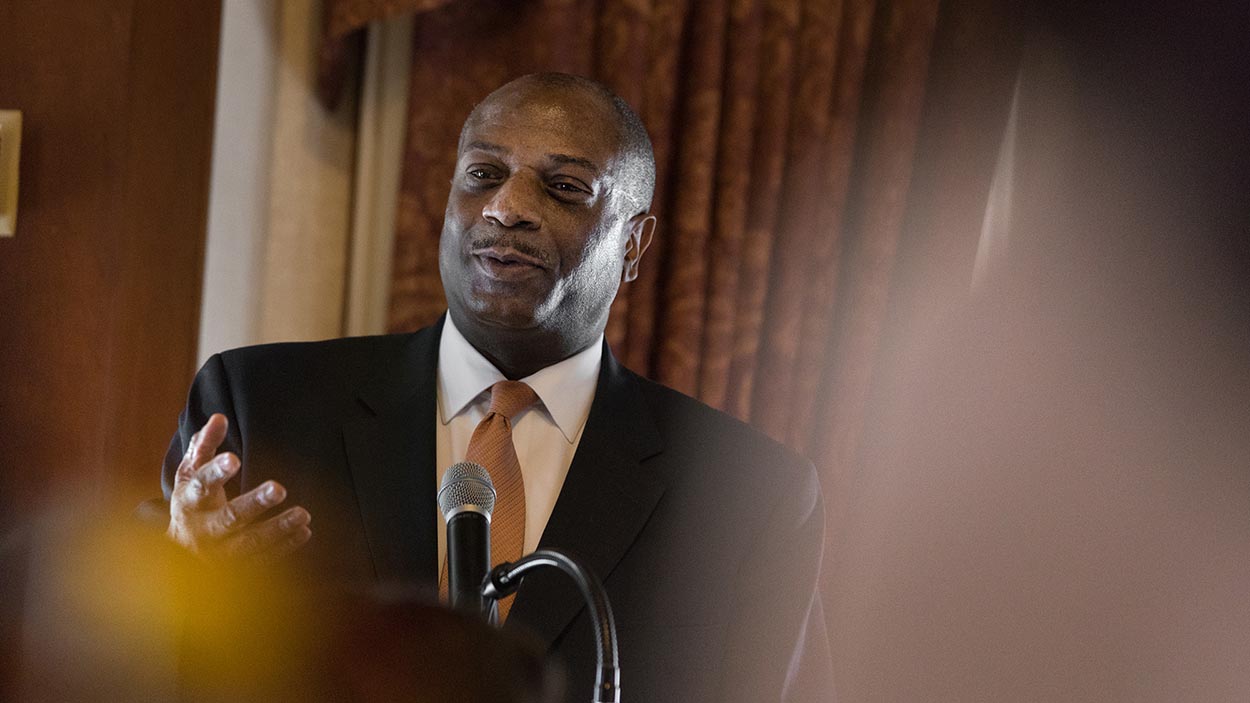 Not so surprisingly, Jesse. J. McLean Jr. ’83, ´94 thought of others when he received the Jennie Carter Award on Sept. 20 during a luncheon in Kara Alumni House.

“This is humbling to receive this award from the university I attended, and to me the Jennie Carter Award is a very special award,” he said.

It is named for Elizabeth “Jennie” Adams Carter, Class of 1881, the University’s first African-American graduate.

“As I thought and read about her I would have loved to know who her champions were, because I think anytime you deal with issues around race and being the first of an institution, I always believe you need champions to help nurture your spirit, resilience and leadership.”

A human services professional with more than 30 years of experience in Pittsburgh’s nonprofit sector, McLean serves as executive director of Western Pennsylvania for Pressley Ridge, where he is responsible for overseeing the fiscal, operational, and clinical integrity of programs throughout Western Pa.

Active and popular during his undergraduate days, McLean was vice president of the SAI Board of Directors and a member of Kappa Alpha Psi Fraternity, student congress, student cabinet and the Black Student Union.

For McLean, his Cal U ‘champion’ was the late Elmo Natali ´53, who held many positions at the University before retiring as vice president of Student Development in 1992.

“Dean Natali was always on me to make sure that I graduated and achieved the goals I wanted to do,” McLean said. “So, when I think of Jennie Carter, I find myself thinking about who her champions were and who was pushing her forward to say you can do this, to encourage and support her, because those people should be recognized as well.”

McLean has not only successfully recommended his alma mater to more than 150 students over the years, he comes to campus a few times each month to check in on their progress.

“I am very connected to and love California University,” McLean said. “I continue to mentor and work with them because I want to make sure they graduate. If they have barriers or issues, I refer them to the proper channels so they can have that resolved.”

President Jones reflected on the legacy of Jennie Carter, who became a respected teacher, school administrator and orator after graduating from Cal U.

“Jennie’s success as a student was not only a significant achievement for the African-American community, but also a noteworthy sign of the changing role of women in America,” she said. “Her memory continues to inspire our campus community.”

McLean received the William H. Moore Award for Excellence in Education for his development of the V.U.L.C.A.N. program, which prepared middle school students for college. He also received the YWCA Racial Justice Award for his work with the Pittsburgh Chapter of the American Jewish Committee at Reizenstein Middle School.

“Through his work and in his life, Jesse McLean had exemplified the spirit of Jennie Carter,” President Jones added.

McLean, who came to Cal U, sight unseen, from Philadelphia, appreciates Cal U’s commitment to diversity.

“I was led here by faith, and coming to California University was the best decision I ever made,” he said.

“Over the past 36 years since I’ve been here, efforts have been made to increase diversity and eliminate some of the systematic barriers that prevented students of color from graduating from California University. I think President Jones, who I remember working here when I was a student, has been a staple with that.”

McLean and his wife, Charlette, live in Penn Hills, Pa. His son Jesse III ´08, ´10 and daughter-in-law Ashley ´10, are also both Cal U graduates.