The first recipients of the recognition for younger alumni gathered at Cal U on Sept. 13. 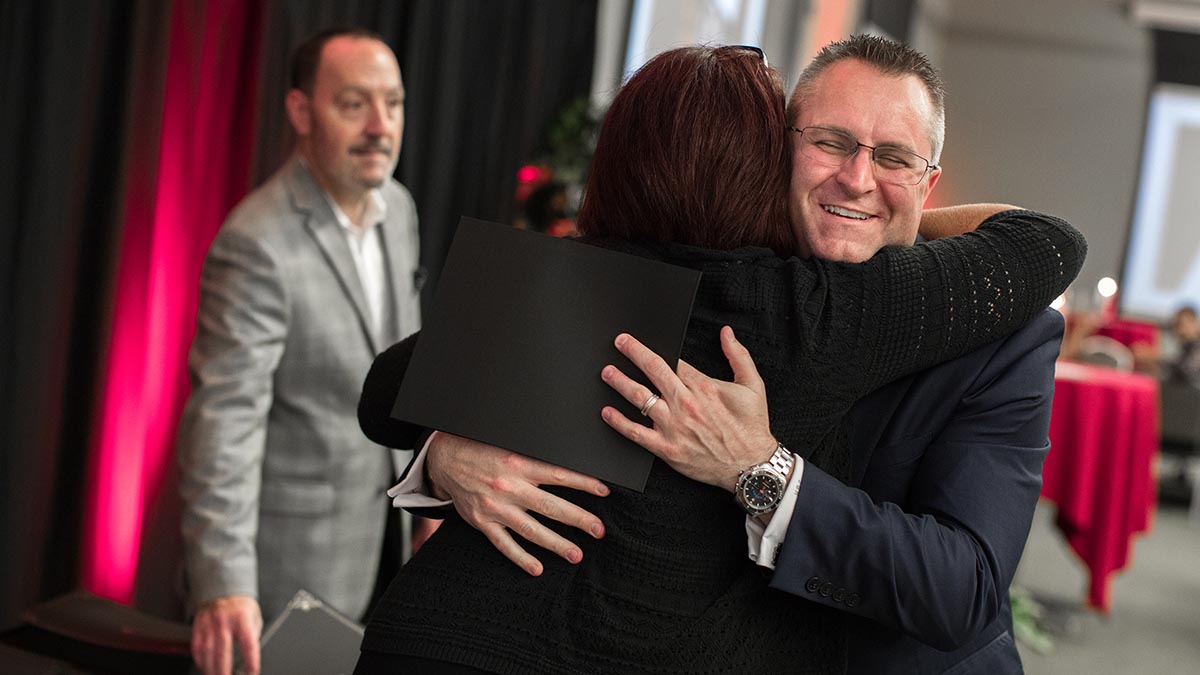 Jesse Hereda ''04, executive director, disciplinary board of the Supreme Court of Pennsylvania.

A notable group gathered in the south wing of the Convocation Center on Sept. 13 for a reception to honor young alumni for their achievements.

It was the first “Under 40” group to be honored by the Office of Alumni Relations.

“We started the ‘Under 40’ recognition to recognize those Cal U alumni who are making significant impacts in their field, in society and for their alma mater early in their careers,” said Ryan Barnhart, director of Alumni Relations.

“We have a varied group of recipients — from NFL team captains, to entrepreneurs, to award-winning educators, to leaders of billion-dollar companies. This group of inaugural recipients represents thought leaders in conversations on the local, regional, national and international stages.”

Read more about the winners.

Caris ’14 and Marshal ’09 Carper, of Canonsburg, Pa., have remained connected to Cal U through the Career and Professional Development Center. She is a recruiter for WVU Medicine and he is an author, game designer and marketing expert.

“I’m thankful to all the Cal U professors who poured so much into me,” Caris Carper said. “I hope to be able to pay that forward.”

“It’s humbling to be honored in the augural class — I graduated with some exceptional people,” Marshal Carper added.

Cody Elias ’12 is multimedia producer for the Oakland Athletics of Major League Baseball.

“All the professors were great — Dr. Cumings, Dr. McGukin, Dr. Carter,” he said. “I moved to California six months after I graduated. I’m just 30 years old, and this has been a chance to look back and reflect on how much my career has evolved.

“My company was so supportive of me coming back to Cal U, even though the A’s are in the middle of a playoff run!”

For Caitlin Brown ‘’15, Cal U has impacted her family for generations.

“My grandfather (Edward Stankovich) was a janitor here. And my mom (Catherine Stankovich Brown) and aunt (Susanne Stankovich) are both graduates,” said the adaptive exercise specialist, gym owner and Paralymic coach from Virginia.

Dr. Carl Jay is a podiatrist in Texas who is about to open a practice in Michigan.

“The professors in the science department at Cal U were about and beyond,” he said. “I’ve been at bigger universities, and this school easily prepared me for the basics I needed to know in medical school.”

President Geraldine M. Jones, herself a successful alumna from the classes of 1972 and 1980, addressed the Under 40 honorees.

“Your accomplishments demonstrate the value of a Cal U degree has played in fulfilling your potential,” she said. “As one alumna to another, it’s great to see the progress you have made.”