Students Teams Up for Audiobook Recording 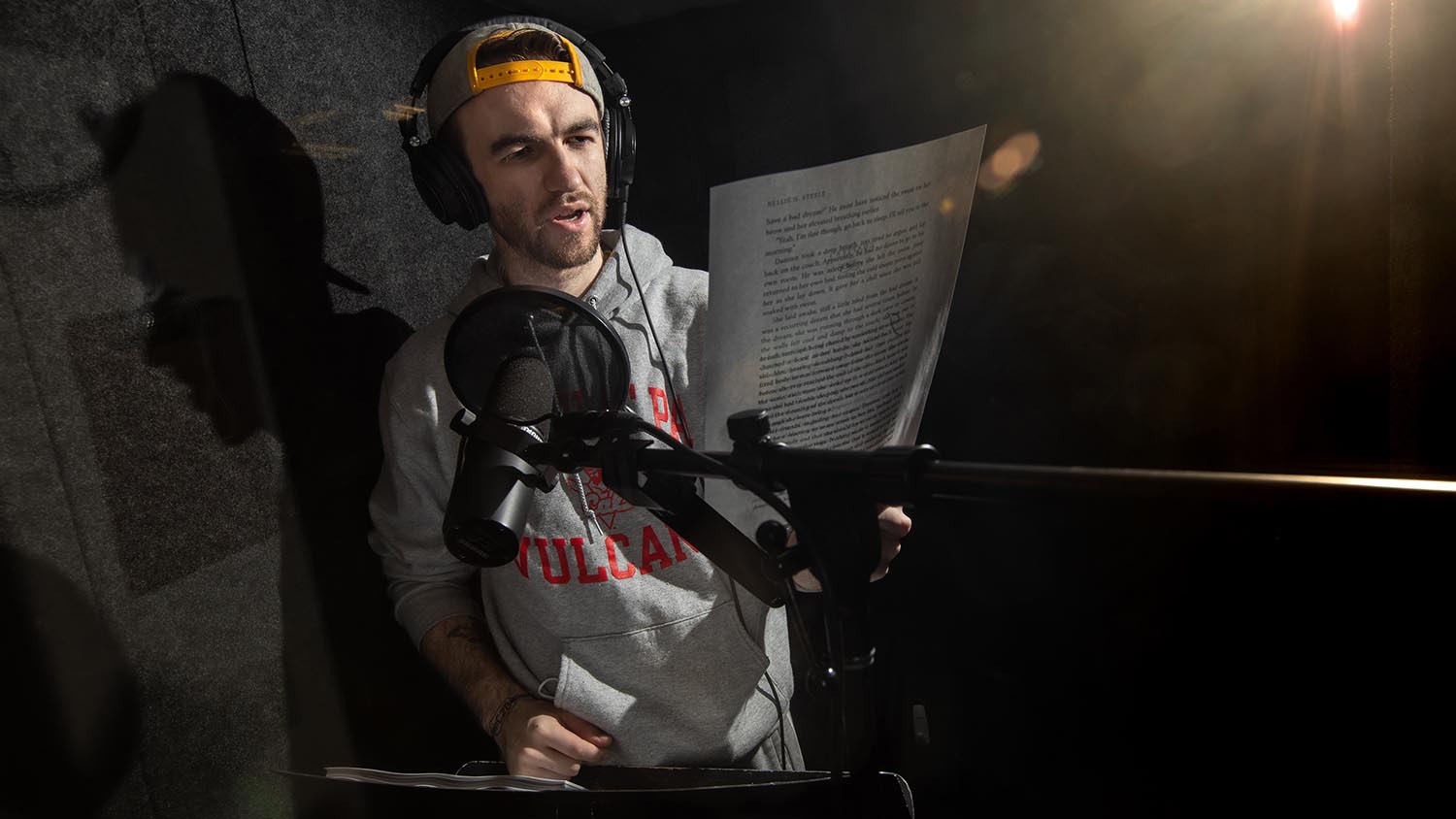 Student Shane Callahan works on the audio portion of the audiobook in the Gallagher Hall studios.

By leaps and by bounds the popularity of audiobooks continues to grow.

In 2019, U.S. sales totaled $1.2 billion, up 16% from the previous year, with a corresponding increase in units, the Audio Publishers Association reported. It’s the eighth year of double-digit revenue growth.

Dr. Melissa Sovak is a part of this trend, and she’s tapping into student creativity to produce her work.

“Shadows of the Past,” the first book in the Shadow Slayers series, follows Josie Benson, who is plagued by a recurring nightmare and searches for secrets buried in her past.

To produce the audiobook, which is due out in late 2020 or early 2021, Sovak found the necessary talent in the Department of Culture, Media and Performance.

“There are at least 15 spoken characters and one-off characters,” said Shane Callahan, a junior theater major who is the voice for all of them. “I had to come up with vocal recipes, how they’ll sound with accents and different vocal characteristics, for every character, male or female.

“I have to match pitch, rate of speech, whether the voice is breathy or thick, high, low, deep, and it has to remain consistent throughout the book.”

He has relied on the expert guidance of Dr. Michele Pagen, a theater professor at Cal U, during his preparation.

“We use Estill Voice Training across all of our curriculum. One of the classes, voice and speech, prepares students for this type of career, because the potential is out there, it is a fine way to make a living,” Pagen said.

“Shane meets with me regularly, and he’s preparing all the voices for all the characters and notes on how he’ll manipulate his vocal mechanism so that down the road he can re-record if necessary.”

Sovak also turned to Greg Davis, an assistant professor who teaches in the commercial music technology program, to help with music and the audio recording.

Maglicco, Callahan and Cox will use equipment in Gallagher Hall to record the book.

“I had a lot of freedom to be creative,” Maglicco said. “I asked Dr. Sovak early on if she’d be open to something along the lines of ‘Twin Peaks’ or ‘Stranger Things,’ and I just sat down at the keyboard and played along with the trailer.

“She emailed us the credits so we could see how our names would be listed, and I was thrilled to see ‘Robert Maglicco, original music.’”

That thrill is entirely the point, said Greg Davis, who teaches in the commercial music technology program and has mentored Maglicco and Cox during this project.

“Resume-building is the name of the game,” Davis said. “Taking on projects like this is the best way to learn. I try to stay hands-off and check in periodically. I want them to experience what it’s like to have professional responsibility with a client. When they have an issue, they go back to the client to sort things out.

“For Jake as the audio engineer, you have to look for experiential opportunities like this one to get better. You have to look for projects that are different — you might work in a studio setting one day, do live sound at a coffee shop, do voice post-production for radio or TV. This audiobook is really right in line with something an audio engineer would be asked to do.”

Sovak is pleased that her avocation also benefits Cal U students.

“It’s going to go out in an international market, and their names will be attached to this. Everyone will know that Cal U is the place this was created.”