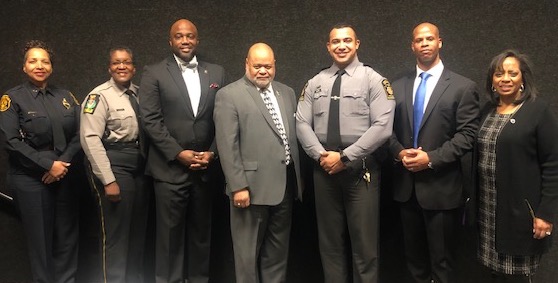 Six members of the National Organization of Black Law Enforcement shared their thoughts and experiences during the final Black History Month “What’s the T? Thoughtful Discussions About National Narratives” event in Vulcan Theatre on Feb. 20.

Dr. Mathilda Spencer, of the Department of Criminal Justice, served as moderator of “(In)Justice Through the Lens of African American Law Enforcement.”

“I think I deal with racism, discrimination and pre-judgment every day,” Bickerstaff said. “You can’t use fisticuffs, but you must work their minds. I prefer the phrase ‘all lives matter,’ and if something is wrong, say something because people will know you’re watching.”

“You have to pick your battles, and if you wear your emotions on your sleeves, you (may be) perceived as an angry black woman,” she said. “If you change the minds of your leaders, you’ll change your followers,” she said.

On the job, officers “try to be that buffer and help people work through and understand the criminal process while making sure there’s no retaliation and protests do not become violent.”

“What I would say to young people in these contentious times, when you see YouTube videos and news snippets, is to make sure you gather enough information to make an informed opinion about what occurred,” he said.

Allen mentioned Antwon Rose II, the 17-year-old black teen-ager who was fatally shot by a police officer in East Pittsburgh.

“When I see Antwon Rose, I see myself when I young, running away from the police after doing something stupid,” he said. “Now I could not imagine doing anything else other than being a police officer.”

Pratt cautioned the criminal justice majors in the audience to gather facts before making judgments.

“Culturally, people do not understand each other, and you cannot assume you understand someone because of their color, clothes they wear or where they are from,” he said.

Stewart urged the students to join the National Organization of Black Law Enforcement Executives or the NAACP. Both organizations welcome all races.

Ernest D. Withrow, president of NOBLE Pittsburgh chapter, was in the audience.