Barnhart Reflects on Cal U Career

Dr. Bruce Barnhart, provost and senior vice president for Academic Affairs at Cal U, is retiring after a 36-year career. 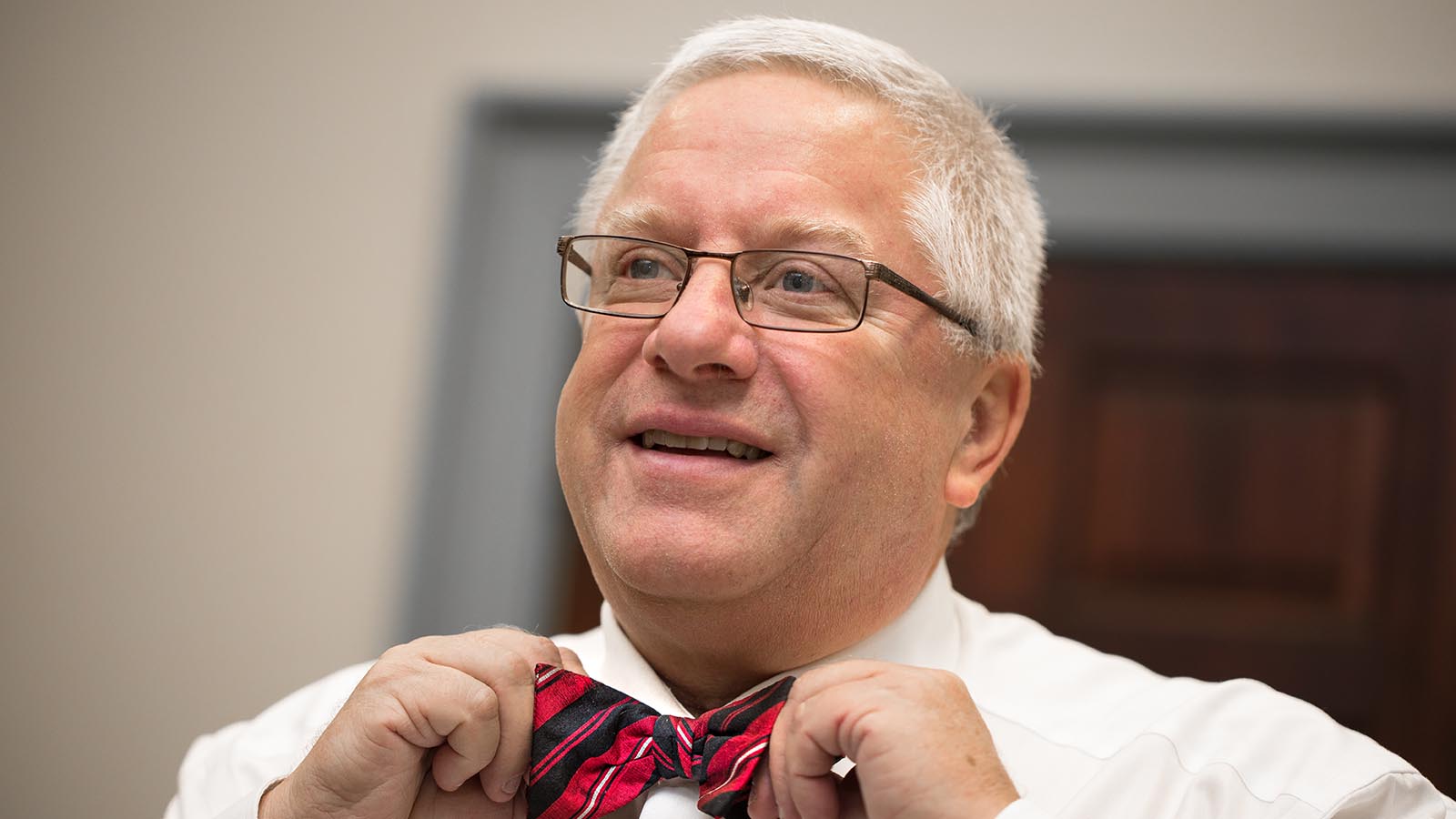 Dr. Bruce Barnhart officially retires July 3 as provost and senior vice president for Academic Affairs at Cal U. He earned three degrees from the University – a B.S.Ed. in biology in 1983; an M.Ed., also in biology, in 1989; and an A.A.S. in physical therapy in 2001— and has roots at Cal U that extend from his 24 years in the classroom to his 12 years as an administrator.  We asked for his thoughts as he prepares for “the next phase of my life.”

You are a man of many bow ties, your signature look. What tie shall it be for your last day at Cal U and why? If I were to wear a bow tie on my last day, I would go with a simple black and red one. Nothing particularly important is happening on 7/3; in fact, I think it is a holiday to observe 7/4.  Normally, if it were a work day, I would try to sport something in the red, white and blue genre.

Who were the mentors who made a difference? Easily my two mentors were Dr. Bill Biddington; and dean, then provost and then president, Geraldine Jones. Dr. Biddington showed me how to be a faculty member, how to conduct myself around students, faculty colleagues and administrators.  I started here at the age of 23 as a faculty member with only a B.S.Ed. degree, and so I had lots to learn and experience. He taught me about the importance of giving back to the University. Thirty-six years later, I am still learning from Dr. Biddington, despite his retirement last August.

I first got to work with President Jones when she was a faculty member and chair of the University Wide Promotion Committee.  Later she became my dean, from 1998 to 2008.  When she became provost, she invited me to join her administrative team. I was reluctant but she was persistent, and I became an associate provost/associate vice president in 2008.

It is difficult to describe all of the things I have learned from her about leadership, interacting with people and how to make prudent decisions. The past 12 years working for Provost/President Jones revitalized my career, and I will forever be thankful that she took a chance on me, a faculty member/clinician, to serve as one of her top assistants.

It is difficult to explain what a truly great leader and President she is. Her retirement announcement means she will be ending her 40-plus year career at Cal U, and she will be moving into a retirement that she richly deserves. Part of her legacy will be that she became President during a difficult time and put the University onto a sustainable path despite adverse demographics and other considerations.

What have been the most memorable changes at the University in that time? There have been so many changes to the physical landscape – buildings coming and going, improvements to the infrastructure, etc.  When I first arrived on campus as a student, there was steam leaking up through the ground from many steam-pipe leaks; it looked like campus had volcanic activity.  Mud paths between buildings were common. Now we have a beautiful campus that everyone compliments when they see it.

I have seen many faculty members depart and new ones take their place. The only constant, as the old adage says, is change. A good example is the new reorganization of the undergraduate colleges. While some are resistant, before long, the old system will be just a distant memory, and everyone will know the new system as business as usual.

Finally, the biggest change for me was no doubt the presidential transition from President Armenti to President Jones. President Jones promoted me to the provost’s role and into her Cabinet. She gave me a free hand to operate the Academic Affairs Office. So I literally went from being the athletic trainer for women’s basketball and an anatomy teacher to the provost and senior vice president for Academic Affairs in a brief 4-year time span.

What would you hope people might remember from your tenure as provost? I hope that people will think that I acted as the provost in the fashion that I wanted to do, in that I saw my role as helping the faculty and students to be successful. Having been a faculty member for 24 years prior to joining the administration, I tried to be supportive of them. I know what it is like to teach a course with 90 enrolled. I have taught online. I did lectures and labs and I received WKE to work on non-classroom activities. I always thought having been a faculty member helped me to interact well with our faculty.

Personally speaking, do you have a favorite moment? Maybe from your days in the classroom, or as a trainer?  I had many, many more good days than bad. Certainly, the 2003-2004 women’s basketball season stands out. I was the AT for the team, attended every practice and game and, of course, we won the NCAA Division II championship. It was an incredible experience. I made lifelong friends with the coaches and players (I still hear from them on Facebook, for example).

But there are so many good memories, stories I could tell about working with my three main colleagues in athletic training – Bill Biddington, Joni Roh and Bob Kane – and all of the AT students over the years. Most have gone on to successful careers in athletic training, physical therapy, physician assistant and other fields.

What will you miss the most? I will certainly miss working with the folks at Cal U. I can honestly say that I get along with everyone here at the University, so not seeing them will be quite an adjustment.

I have been blessed to work with outstanding administrators, faculty and staff.  I’ll miss folks in my office like Mary Kay Dayner, Daphne Livingstone, Marisa Novak and Lanie Bilitski, all of whom would do anything for me. They made it a pleasure to go to work each day.

The other thing is that I no longer will be at the center of it all. As provost, everyone wants your opinion; you make many important decisions and get to work closely with the President and her Cabinet. With retirement, that goes away, so I hope to fill the void with my wife and family, particularly hoping to teach my grandson how to golf and to do other lifetime sports that he will enjoy.

What do you think we have learned in this past half-year of rapid adaptations and changes to a remote learning environment? We demonstrated this spring that the University is very flexible and is able to react to anything that comes its way. A year ago, none of us would have thought things would be as they are today. We are planning this summer to convene face-to-face courses in as normal a setting as we can, while also preparing for the possibility of having to return to all online/virtual learning if the pandemic worsens.  We in the admininstration, as well as faculty and staff, have to remember to always be student-centered.  Without the students, there is no University.  If we always think of students and the University first, there is nothing that we cannot do.