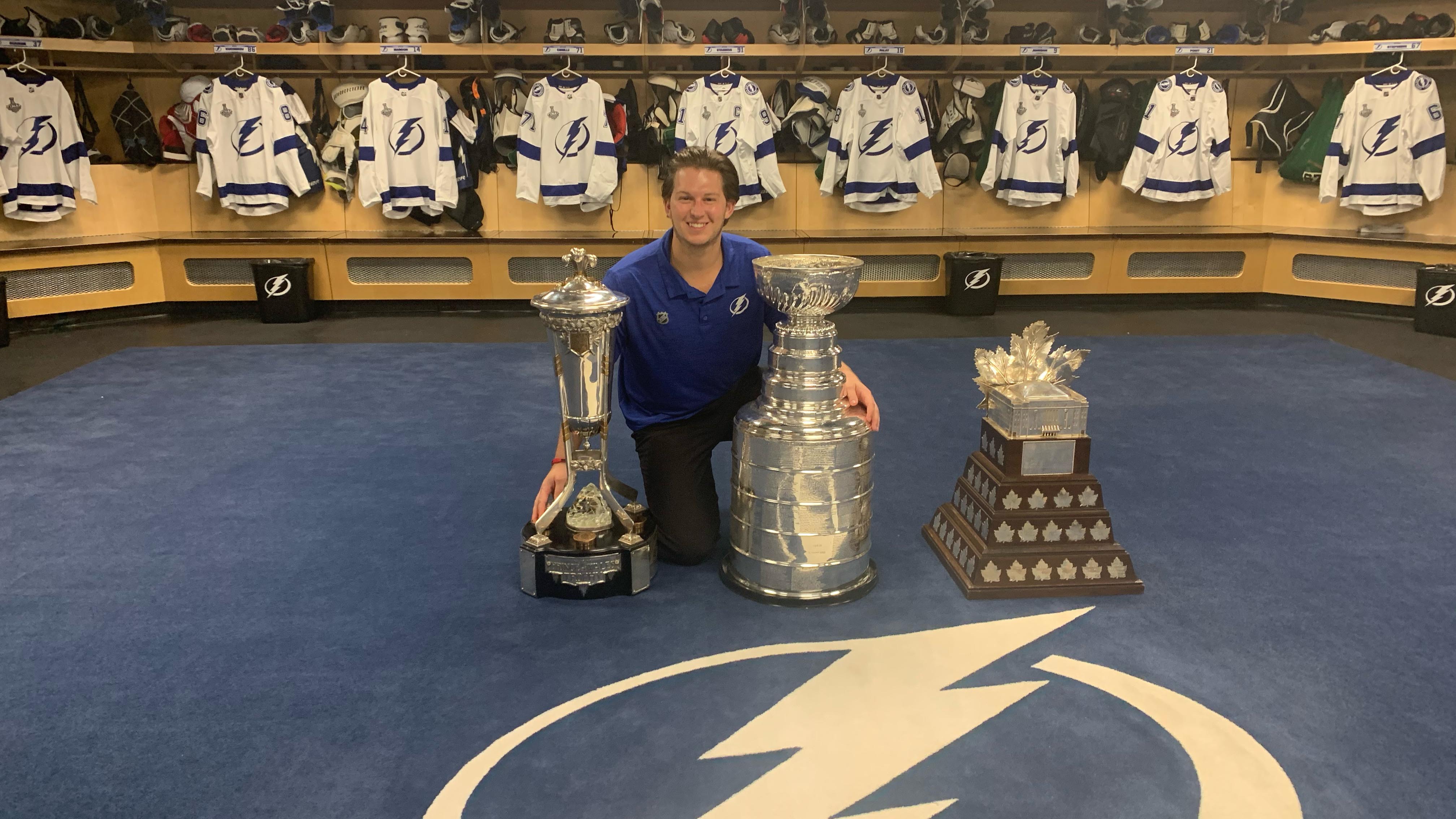 Cal U graduate Josh Famularo poses with the Stanley Cup.

Lightning struck again for Tampa Bay last month, as the NHL franchise won the Stanley Cup for the second time in its history.

As the Lightning’s equipment transfer, he remained in Florida and handled logistics for deliveries being sent to opposite sides of Canada, as the NHL Playoffs were held in hub cities of Toronto and Edmonton during the COVID-19 pandemic.

“I was sending stuff by the crate every other week,” Famularo said. “Shipping anything internationally is a pain because of the paperwork involved. I had to send a couple things to Edmonton, and those shipping costs were pretty expensive when you’re overnighting something from Florida to Northwestern Canada.”

Famularo, who earned his degree in business with a concentration in marketing and a minor in leadership at Cal U, joined Tampa Bay this year after serving as the head equipment manager of Orlando Solar Bears – an affiliate of the Lightning in the ECHL.

The move to the Sunshine State was a homecoming for Famularo, who was born in Orlando before moving to Pittsburgh at age 7.

Famularo started playing the sport at South Fayette High School and enrolled at Cal U. Hid dad, Jim, graduated from Cal U in 1984, and his grandparents are from Brownsville, Pa.

As a freshman, Famularo met some of the Cal U club hockey players through the roller hockey program.

“In my second semester, I remember seeing an email that hockey was looking for an assistant equipment manager. I was one of the first people to respond and just started from there.”

While Famularo was with the club hockey team, the Vulcans finished as high as third at the ACHA National Tournament twice and captured the CHE Playoff Championship four times.

He credits Director of Recreational Services Jamison Roth, who is the general manager of the club hockey team and a former player, and former Cal U hockey equipment manager Josh Carter for his success with Cal hockey and his path to the NHL.

Carter’s uncle spent over 30 years as an equipment manager in the NHL, including 20-plus years with the Washington Capitals.

“If you’re part of Cal hockey, you are part of a big campus family, and everyone looked out for each other. Everyone helped do their part to make the program great and help the people within the program to do great.”

Following graduation, Famularo served as the head equipment manager of the Youngtown Phantoms of the USHL before joining the Hershey Bears of the AHL.

With the Lightning, Famularo coordinates with equipment managers and medical staffs from visiting teams about flight and travel plans. He also helps with tasks like repairing gear, transporting skates from the practice rink to the game arena or placing a microphone on a jersey for game broadcasts.

Team success continued to follow Famularo in the professional ranks, as he was able to actually touch the historic Stanley Cup in year one working in the NHL.

“The first thing I did was get my picture with it, as it’s been years in the making,” said Famularo. “I remember just reading the names and seeing the history of the Cup from the teams that I watched like the 2009 Penguins, the players I worked with and the great players like Mario [Lemieux] and [Wayne] Gretzky.”

Jokingly, Famularo said there is still work to be done: Only the top three equipment staff members are listed on the prestigious trophy.