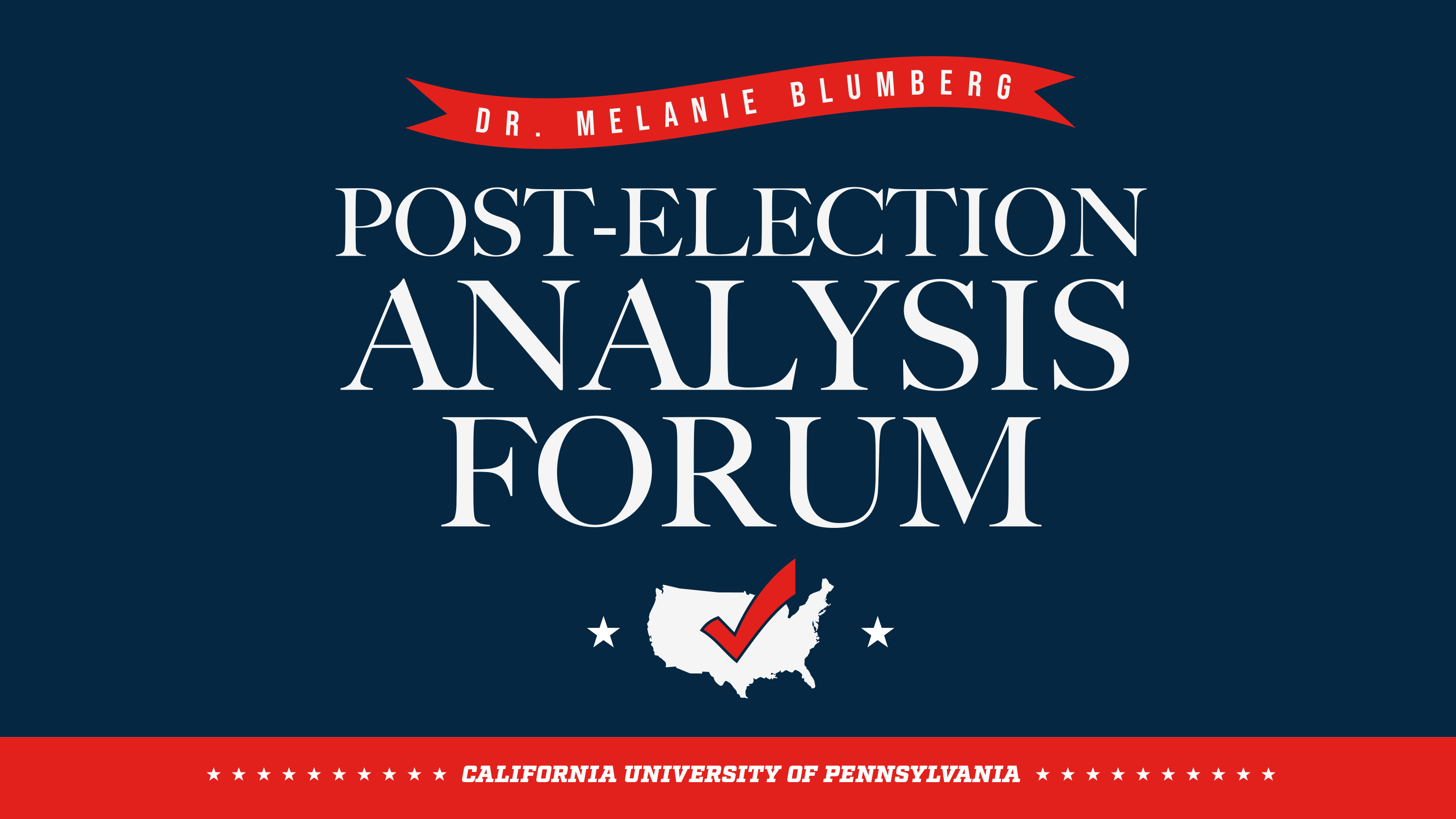 A panel of political experts and commentators weighed in on the Nov. 3 general election at the Dr. Melanie Blumberg Post-Election Analysis Forum, the eighth such forum organized by Cal U.

Cal U history professor Dr. Kelton Edmonds introduced the panel and joined Binning in paying tribute to the late Dr. Melanie Blumberg, a political science professor and founding director of the American Democracy Project at Cal U.

Jon Delano, a political analyst and the Money & Politics editor at KDKA-TV, Pittsburgh, moderated the discussion, posing questions about the accuracy of polling; the complexities of the African American and Latino vote; divisions within the Democratic Party; the fact that the president has not conceded; and the role of the Electoral College.

“They did get it wrong in a lot of the swing states,” Abramowitz said. “I don’t think it’s ‘shy Trump voters,’ but I do think they are underestimating the turnout of non-college white voters; it’s hard to get them to respond to surveys.”

“Polls are underrepresenting people in rural areas,” Gaffney said. “They’re not shy. But finding those people in those areas and getting them to respond is difficult.”

“All polling rests on a bedrock of trust,” Norman added. “I think the consensus here is polling isn’t trusted for a segment of the population that we want to hear from.”

The African American and Latino votes

Exit polls suggest Trump improved nationally with black and Latino voters. The Philadelphia Inquirer reported this could be the third consecutive presidential election in which the number of Democratic votes has declined in that city. Georgia was a different story.

“Philly is my hometown, and I can tell you there is a dispiritedness in the African American community that is deep, so it is an uphill trudge no matter what,” Norman said. “It’s the opposite in Atlanta, where there are dynamic personalities like (former gubernatorial candidate) Stacey Abrams and a much more positive political world view.”

In other parts of the country, including Pennsylvania, the split between moderate and progressive Democrats influenced the election.

“Biden did make small but noticeable gains in less populated counties like Erie … places where his ‘Joe from Scranton’ persona helped,” Jacobson said. “He has an appeal to blue-collar voters and a history with unions, and I think that helped Democrats in 2020. He reveled in his ‘man of the people’ upbringing in a way that other rising stars have not done.”

In a break with tradition, President Trump has refused to concede the election and has begun legal actions in several swing states. Although the panelists agreed that Biden’s win will be upheld, they predicted that he will remain on the public stage.

“Trump is a political rookie,” Binning said. “Every political operator knows the courts never overturn elections. For him to actually act like these lawsuits will be fruitful, they aren’t. It never happens. The election isn’t going to be overturned.”

“The Republican Party is so ‘Trumpified,’ they need those votes in the future,” said Jacobson. “It might hurt their them with Democrats or independents, but they need the GOP base support. And even after the loss, it’s still in Trump’s corner.”

Norman described the Electoral College as “an 18th-century compromise foisted on a 21st-century democracy,” but the panelists agreed that for the foreseeable future, that body will ultimately determine who serves in the White House.

“In 2016, Clinton won by more than 3 million votes but still lost the election,” Abramowitz noted. “We can very close again this time. If you switch 100,000 votes in about four states, Trump might have won by losing the popular vote by a bigger margin than Clinton.

“The only thing to change dynamics would be if Texas becomes reliably Democratic. Then you’ll see Republicans say the Electoral College isn’t a good idea.”

Added Abramowitz: “That’s going to take a while.”

About the American Democracy Project

The American Democracy Project is a multi-campus initiative focused on higher education's role in preparing the next generation of informed, engaged citizens for our democracy. Its goal is to produce graduates who are committed to being active, involved citizens in their communities. California University of Pennsylvania was one of the first universities to pilot the American Democracy Project, in 2003.