Cal U Looks Forward at Convocation

The University community hears more about the Campus Master Plan for facilities. 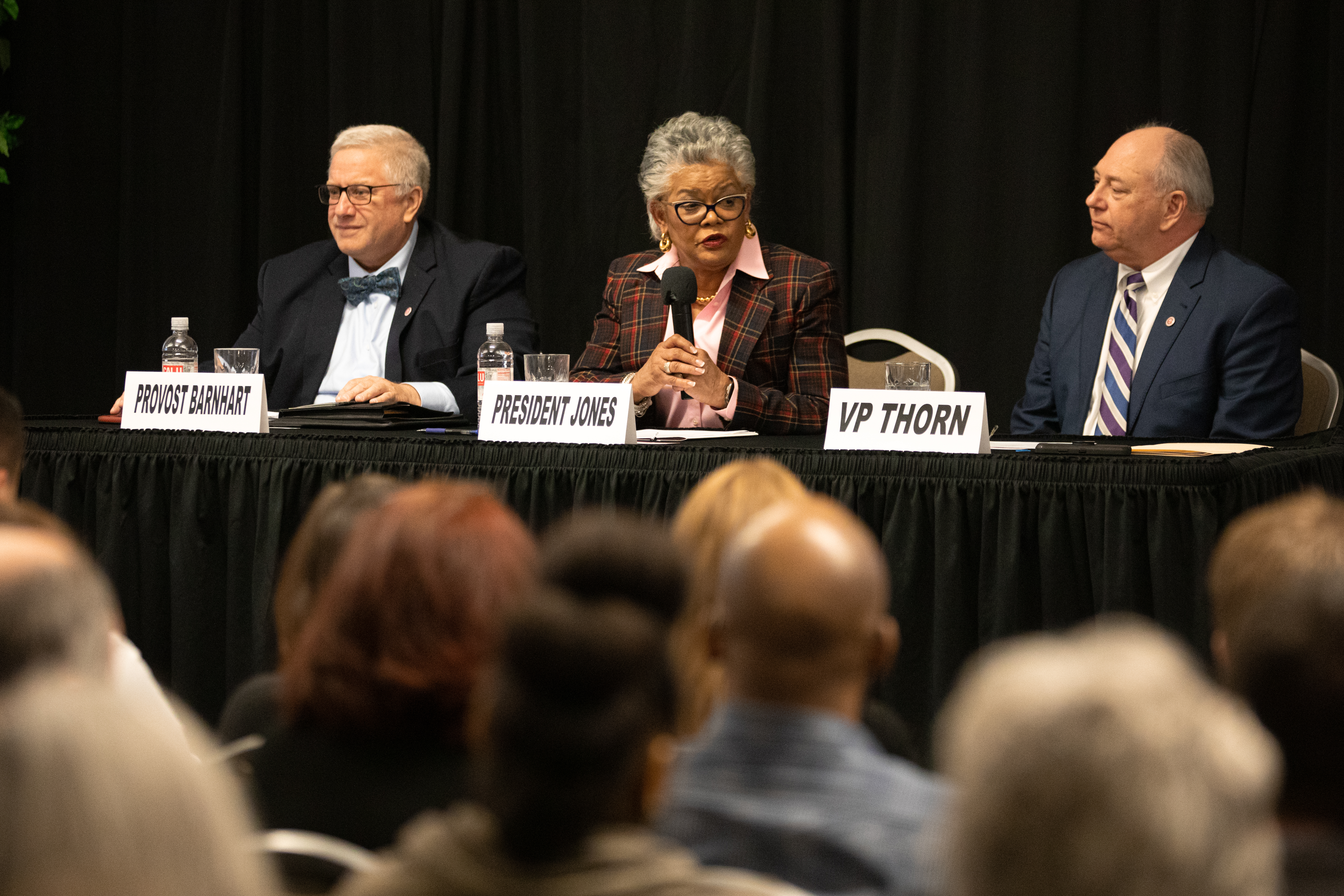 The University community heard updates about the Campus Master Plan for facilities – plus details about Cal U’s financial sustainability plan and its proposed multi-year tuition pricing strategy – Feb. 18 at the Spring 2020 Faculty-Staff Convocation.

The initiatives all are intended to bolster University finances and meet the State System of Higher Education’s requirement that universities identify realistic strategies for achieving financial sustainability within five years.

In the past seven years, the University has cut operational costs by $10 million, non-faculty staff has been reduced by 23%, a strategic enrollment plan has been deployed and new academic programs have been launched, among other steps.

“But in the current climate, those measures are not enough to bring our finances into balance,” the President said.

At the State System’s direction, Cal U submitted a preliminary draft of its five-year sustainability plan in January. As part of the plan, Cal U is seeking State System approval for a tuition pricing strategy that includes a 3% increase in tuition, or $115 per semester, to enhance efforts to help more students succeed academically and remain enrolled until they graduate.

Cal U is committed to using at least $500,000 of the proposed tuition increase to provide additional scholarships for its neediest students.

The multi-year tuition pricing strategy requires approval by the Board of Governors, which is expected to make a determination later this spring. In the meantime, the University is looking to its physical plant – the campus itself – for additional cost savings.

Robert Thorn, vice president for Administration and Finance, led the effort to update the Campus Master Plan. In collaboration with consultants from Buchart Horn Architects, a nine-member steering committee and 26-member board of faculty and staff members spent 15 months examining Cal U’s campus and making the first master plan update since 2008.

“One of the primary goals of the master plan is to develop a comprehensive flexible long-range plan for effective use and reuse of existing land, facilities and infrastructure,” Thorn explained.

After a thorough study based on current and projected future enrollments, the consultants determined that Cal U has a surplus of approximately 260,000 square feet. They estimate that reducing the campus footprint could reduce operational costs by $2.5 million to $3 million per year.

Under a statewide contract to reduce “excess capacity” at System universities, the state Department of General Services has agreed to pay $5.2 million to demolish four Cal U buildings – about 174,0000 square feet – over the next two years.

Building removals tentatively will begin in spring 2021 with Azorsky Hall, followed by the north wing of Morgan Hall, Keystone Hall, and then Gallagher Hall.

“This is a fairly aggressive project,” said Thorn – but the opportunity to “right-size” the campus using state funds was too good to pass up.

The second phase of the master plan features construction of a new science complex to replace Frich and New Science Halls. Subsequent phases include infrastructure changes leading to demolition of the campus steam plant and the Pollack Building, which houses the storeroom, carpenter shop and University Police headquarters.

The plan also calls for converting Residence Hall B to office space, moving the Office of Academic Success to a student-friendly “learning commons” in Manderino Library, and relocating the education department to Noss Hall.

“This campus master plan outlines key projects in sequential order for long-term implementation and success,” said Thorn. “It’s important to know that the plan is a living document that can and will be revised as Cal U evolves into the future.”

He emphasized that input from faculty and staff will be solicited as relocation plans are finalized.

Both Thorn and President Jones enthusiastically called the campus master plan a blueprint for the future of California University.

“There is always some inconvenience associated with building projects, but our campus master plan promises to deliver lasting, long-term gains,” President Jones concluded.

“Our campus has been transformed many times over the last 168 years – and once again, we have an opportunity to reshape our University.”