Matt Reid explores the perceptions of medical marijuana and recreational marijuana in states where both are legal. 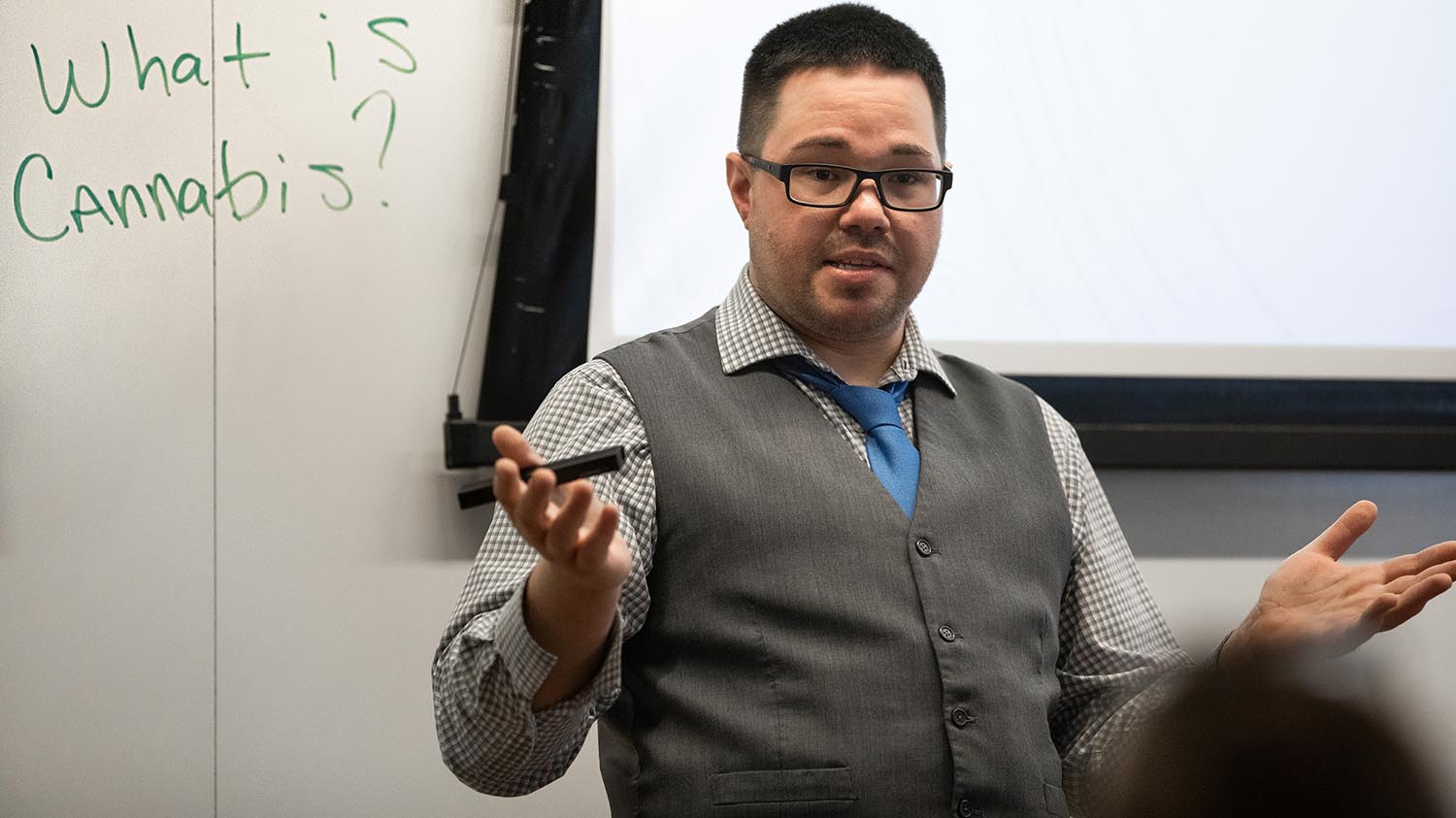 Will cannabis continue to be “medicalized” if it is approved for recreational use?

Matt Reid addressed the topic as the first speaker in the Graduate School Speaker Series.

A Ph.D. candidate at Western Michigan University and a visiting professor at Grand Valley State University, Reid’s talk on March 3 in Duda Hall was based on his doctoral research on the perceptions of medical marijuana and recreational marijuana in states where both are legal.

His qualitative investigation included interviews and observations on five focus groups of registered medical cannabis patients in Michigan along with other members of the medical cannabis community.

“Since cannabis was medicalized through patient activism, my argument today is that we should center how we theorize cannabis-using patients,” Reid said. “We should privilege their voices and their desires when it comes to how we theorize, discuss and even implement cannabis policies.”

Reid said the desire for an alternative medicalization of cannabis is amplified by three things — allopathic intolerance, biomedical ultimatums and pharmaceutical resistance

“(Some) doctors are very intolerant and sometimes issue ultimatums to stay off of cannabis, and there’s an intense disdain for pharmaceuticals in the medical cannabis community,” he said. “It would be good if mainstream or biomedicine viewed cannabis as just another medication rather than a prohibited toxic drug.

Currently, 33 states have laws that allow the use of marijuana for medical purposes; 11 states allow recreational marijuana use.

Reid said all but two patients in his focus groups plan to renew their medical marijuana cards.

“There is a legitimacy in maintaining a distinct medical cannabis program in a post-prohibition state,” he said. “In some cases, new patient interest grows when it’s legalized because a stigma is decreased.”

“The alternative medicalization of cannabis empowers patients, frees them from biomedical control and gets them access to the whole plant as medicine rather than just pharmaceutical isolated compounds,” Reid said.

“While patients in my focus groups have agreed that things have gotten better, they all agree that we have yet to achieve a status where we can say cannabis is normalized in American society.”

“What we are hoping to bring forth is that as culture and society changes so do our perceptions, beliefs and our sanction,” Sweitzer said. “What better way to investigate all these different norms than to begin an open discussion of how things were compared to how things are today.”