Football Star Heads to Cal U Hall of Fame

For the 2006-2009 football seasons, Johnson was a starter in one of the game’s most challenging positions. 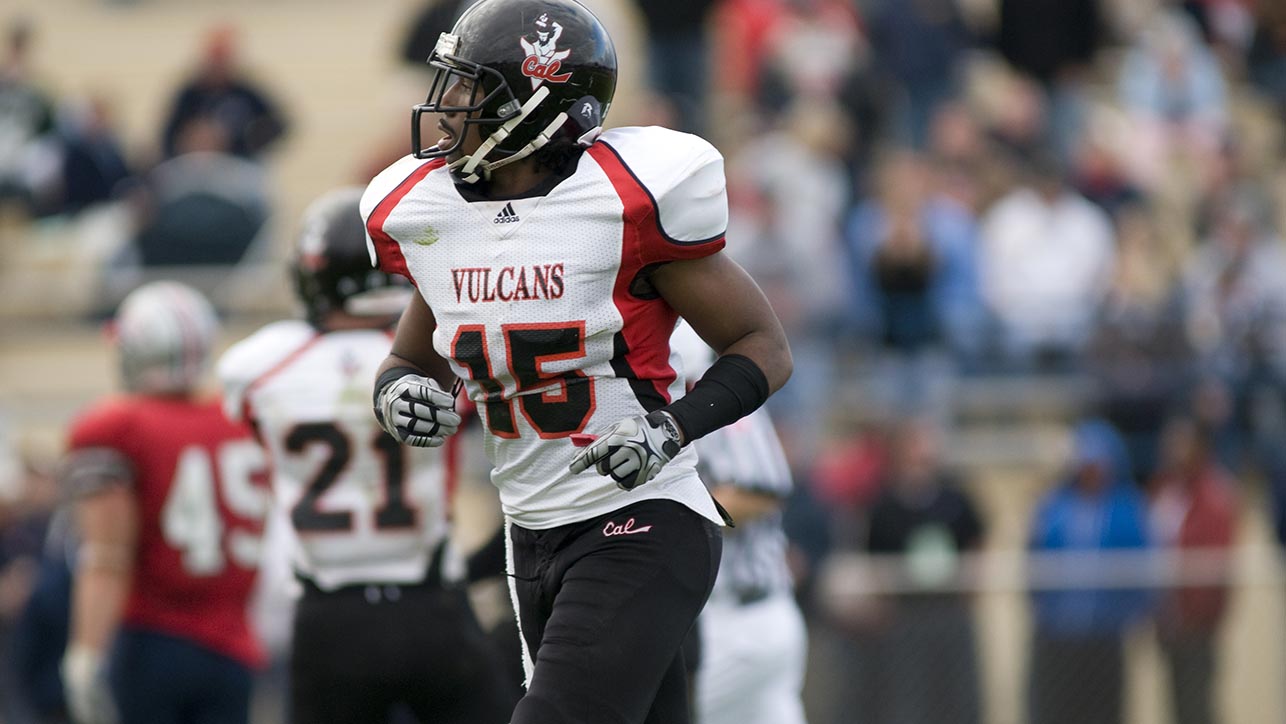 Before he played in the National Football League, Terrence Johnson was a cornerback for the Vulcans. Soon he’ll also be a member of the Cal U Athletic Hall of Fame.

For the 2006-2009 football seasons, Johnson was a starter in one of the game’s most challenging positions. A three-time all-conference selection, he earned multiple All-America honors during his final two years at Cal U.

The five individuals selected as 2020 members of Cal U's Athletic Hall of Fame will be honored at the Bow Ties & Pearls Ball on May 2. Tickets and information at calu.edu/bowtiesball.

When he caught the ball, he ran. Fast. A championship runner in the off-season, Johnson chalked up a total of 693 return yards, highlighted by an 82-yard kickoff return for a touchdown in the 2008 NCAA Division II Playoffs.

During his time at Cal U, the shutdown corner helped the Vulcans compile a 44-10 cumulative record and 25-1 PSAC-West mark, with four consecutive PSAC-West titles and three straight appearances in the NCAA Division II national semifinals.

“We had a bunch of great WPIAL players, along with record-setting guys from Ohio,” Johnson said. “We took nothing for granted, worked hard, the coaches managed us right and it all just came together.”

With his induction May 2 at the 2020 Bow Ties & Pearls Ball, Johnson will become the sixth Hall of Fame member to have played for head coach John Luckhardt, who also will be inducted that evening.

“This honor brings back memories of the first time ‘Coach Lucky’ came to my door with his vision for Cal,” Johnson said. “Then we went on that great run. To be honored with him is just something very special.”

Johnson recalls his year as a redshirt in 2005, when he would slip on a red shirt and find his way onto the field during practice.

“I would blend right in with the running backs and receivers, and it probably took about three days for the coaches to realize what I was doing,” Johnson recalled, laughing.

“I was a small kid, not heavily recruited, and to be at Cal U with all of these great players … I felt that I had to prove that I was able to fit in. I was really just trying to compete, and I think the coaches took notice of me and appreciated it.”

Luckhardt got his message.

“This is a guy who was not going to play in any games that year, but that kind of dedication not only tells you what kind of person he is, but why he went on to be an All-American and play several years in the NFL,” the former head coach said.

“We’d line him up against the other team’s best receiver each week, including some that were supposed to be the best in the country, and he’d just shut them down. … Terrence is one of the reasons why we were as good as we were.”

As a student-athlete, Johnson was tapped for the American Football Coaches Association, AP, D2Football.com and Daktronics All-America teams.

He also played in the 2010 Valero Cactus Bowl, an all-star game for senior football players.

After earning his degree in criminal justice in 2009?, Johnson spent three years in the NFL, playing for  New England, Atlanta and Indianapolis, where in 2011 he made 37 tackles for the Colts. He also played one season of Arena Football with the now defunct LA Kiss.

“I took everything as a challenge,” Johnson said. “If there was an opposing receiver who was supposed to be the best, that’s the matchup I wanted every single time.

“Cornerback is one of the most difficult positions to play because it’s a guessing game. You have to stop a guy from doing what he does best. … You have to get in his mix and take pride in it to accomplish that.”

“When I was at Cal U, it was a great time,” he said. “You had a guys from different areas that lived in the same circles, who were all kicking, scratching and focused on accomplishing the same things. We made the best time of it.”