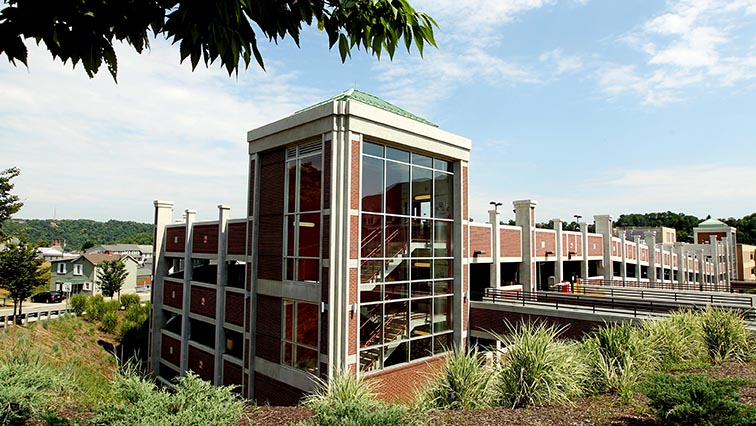 More than four years after it was shut down, the parking garage at California University of Pennsylvania is poised to undergo repairs.

The Vulcan Parking Garage has been closed since August 26, 2016, when a 20- by 2-foot piece of concrete broke off the second level of the garage and crashed to the ground level. No one was injured and no cars were damaged, but Cal U officials immediately shut down the facility, citing safety concerns.

A subsequent inspection revealed additional safety hazards in the $13 million garage, which had opened in 2010.

In 2018, two years after the collapse, the University filed a lawsuit in Washington County Common Pleas Court seeking a settlement with building contractor Manheim Corp. and its bond-holder, Travelers Casualty and Surety Co. of America.

At last night’s quarterly meeting of its Council of Trustees, Cal U announced that an agreement has been reached, and work to bring the garage back to a safe and usable condition will begin this semester.

“Safety has always been our No. 1 concern,” said Robert Thorn, vice president for Administration and Finance at Cal U. “We have said from the start that we will not reopen the garage until we are convinced beyond a shadow of a doubt that the structure is safe for our students, employees and guests.”

A complete repair of the five-level parking structure will be funded entirely by the defendants, at an estimated cost of $2.4 million, Thorn said.

In addition, the University will receive an estimated $1.35 million as reimbursement for non-construction expenditures, such as legal fees, engineering costs and lost parking revenue, which the University estimated at $275,000 per year.

“After a painstaking forensic investigation and a long and complex legal process, we have a solution that we believe is fair and equitable,” Thorn said.

As part of the repair settlement, a “mockup” and testing of the proposed repair solution occurred last week on the fourth floor of the Vulcan Garage to ensure that the proposed repairs will mitigate all structural deficiencies within the facility.

Testing of the mockup repair was performed by the global engineering firm Wiss, Janney, Elstner Associates (WJE), independent testing agency Construction Engineering Consultants Inc. (CEC) and the state Department of Labor and Industry (L&I). Preliminary results of the testing indicate that the repair solution is viable.

Consultation to finalize details of the repair is occurring this week between the three testing entities and Howard Shockey and Sons Inc., the contractor performing the work.  Once those discussions are completed, repairs to the entire garage will begin.

WJE, CEC and L&I will continue to inspect and test during all phases of the repair work.  Once all repairs are completed, the facility will undergo a final inspection to ensure that all repairs were completed to the standards defined in the repair mitigation plan; only then will the Department of Labor and Industry grant an occupancy permit for the garage.

Should the repairs and inspections proceed as anticipated, Cal U may be able to reopen the Vulcan Parking Garage in spring 2021.