Rontez Miles and Eric Kush were both selected to the D2Football.com All-Decade Teams. 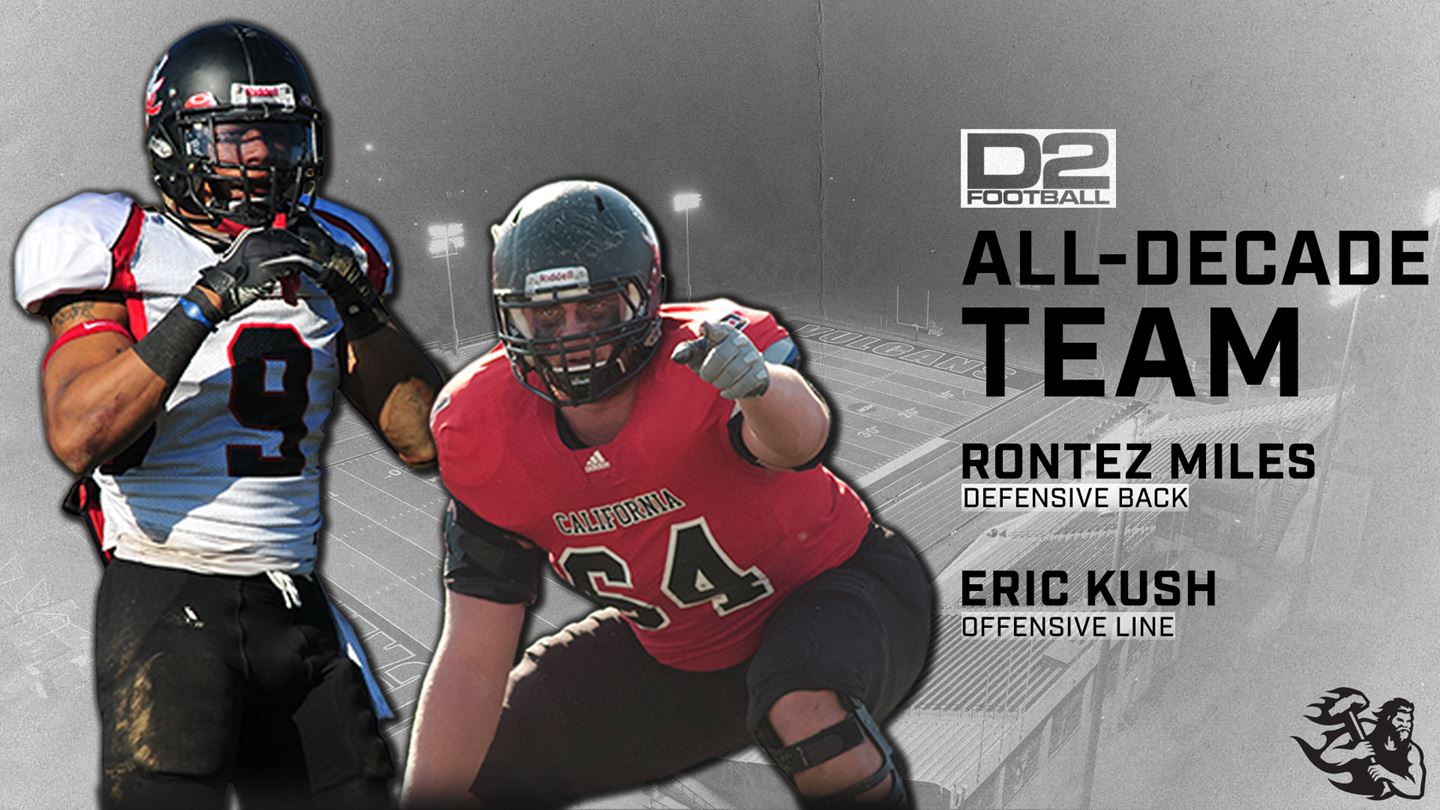 Former California University of Pennsylvania standouts Rontez Miles and Eric Kush were both selected to the D2Football.com All-Decade Teams for 2010-2019.

Miles '12 was a first-team selection at defensive back and Kush '12 was a second-team honoree at offensive line. The Vulcans were one of three teams from the Pennsylvania State Athletic Conference (PSAC) to have at least one representative on the All-Decade Teams with Miles being the league's only first-team defensive representative.

One of the most decorated players in program history, Miles was a four-year starting defensive back from 2009-12 and was a two-time D2Football.com All-American. He finished his career with 257 tackles after making at least 50 stops in each of his four seasons, plus registered 10 interceptions and 23.5 TFL over 50 career games. Miles was chosen the 2009 PSAC West Freshman of the Year before being selected the PSAC West Defensive Athlete of the Year as both a junior and senior. The Woodland Hills product received All-America status nine times over his last two seasons while combining for nearly 150 tackles and nine interceptions in that span. Miles earned a bachelor's degree in liberal studies and a minor in justice studies from Cal U in 2012.

Miles was invited to the NFL Combine following his senior campaign and signed with the New York Jets as an undrafted free agent in 2013. He has played seven seasons in the NFL, all with the Jets, and served as a captain for New York last year. Miles made his first professional interception in 2015 before setting a career high with 55 tackles the following season.

Kush was a three-year starter at tackle and center while playing from 2008-12 and was a D2Football.com All-American as a senior. He started 32 games in his college career, including 22 at center over his last two seasons. Kush was named an All-PSAC West First-Team honoree in 2012 and was selected to the East-West Shrine Game in Tampa, Florida. He earned a bachelor's degree in justice studies and a concentration in forensic science in 2012 and is currently pursuing his master's degree from Cal U in exercise science and health promotion with a concentration in performance enhancement and injury prevention.

A Chartiers Valley product, Kush was selected in the sixth round (170th overall) of the 2013 NFL Draft by the Kansas City Chiefs. He has played for eight teams over his seven-year NFL career, appearing in all 16 games last season with the Cleveland Browns. Kush started one game for the Chiefs as a rookie and has made 19 starts in his career. He recently signed with the Las Vegas Raiders.

Kush and Miles helped lead the Vulcans to three-straight appearances in the NCAA Playoffs from 2009-11, including the NCAA Super Region One Championship in 2009. Over their four-year careers, Cal U posted a 39-12 overall record and a 24-4 mark in PSAC West play with at least a share of three divisional titles.

The D2Football.com All-Decade Teams were selected by the staff of D2Football.com with input from coaches across the country. To be eligible for the honor, a student-athlete must have played during any season from 2010-19 and have must have completed their eligibility prior to the 2020 campaign. In addition, players must have also been named a D2Football.com All-American during that time period.