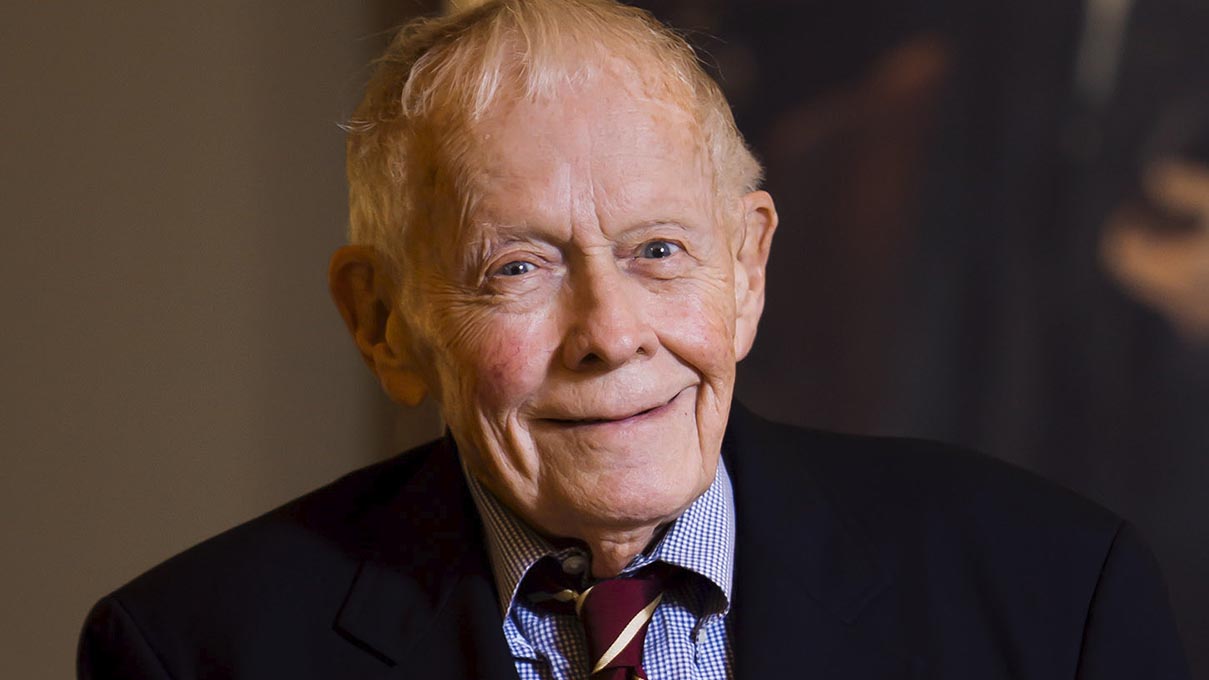 As a faculty member, administrator and California University’s fifth president, Dr. John Pierce Watkins always put students and their academic progress first. Now a library fund he established will serve as a memorial.

Watkins joined the English faculty at California State College in 1957. He served as department chair from 1966-1973 and as vice president for academic affairs from 1973-1977. After a nationwide search, he was named president of the college in 1977.

As president, Watkins oversaw the construction of Manderino Library and restoration of Old Main, obtained funding for California’s emerging science and technology programs, gained approval to open the Business and Economics Department, and guided Cal State’s transition to university status in 1983. He was a driving force behind the Mon Valley Renaissance program, which supported economic development in the region.

“Dr. Watkins’ contributions to our University were significant,” said Robert Thorn, interim president at Cal U. “He led California as it transformed from a state college to a university within the newly formed State System of Higher Education. As a faculty member, an administrator and then as president, he made an enormous difference in the life of this institution.

“Our University mourns his passing, and we will keep his family in our thoughts.”

During his long career in higher education, Watkins was state chair of APSCUF, the faculty union; president of the Pennsylvania State System of Higher Education’s commission of presidents; and president of the Pennsylvania Association of Colleges and Universities. An advocate for international education, he was co-chair of the American Association of State Colleges and Universities’ Committee on International Programs.

Among many other honors, he was a recipient of the Foundation for California University’s Dixonians Award and the Cal U Alumni Association’s Illustrious Californian Award. Watkins Hall, home of Cal U’s Department of Business, Economics and Enterprise Sciences, is named in his honor.

Always involved in campus life, Watkins’ obituary describes him as “a regular and recognizable spectator at Vulcan athletic games during and after his professional career at California University.”

Watkins retired in 1992 and was awarded emeritus status. Post-retirement, he served as interim president of Shepherd University in West Virginia.

Geraldine Jones, who retired last week as Cal U’s seventh president, noted that she and Watkins shared a similar background. Both grew up locally, attended California High School and built a career at their collegiate alma mater.

“President Watkins was my friend and mentor, and his company was always welcome,” Jones said. “He appreciated people’s value and their hard work. He always advocated for those less fortunate.”

“During my administration, he and I would lunch together at my office, and I always looked forward to our conversations. We would reminisce about his years here. I was impressed with how current he remained and how he always provided a historical perspective on things. We would always end our lunch with a hug and a laugh.”

Watkins was an expert public speaker, she said, “like a maestro conducting an orchestra.” She recalled his December 2014 Commencement address, which he closed with a lyric from the rock band Three Dog Night: Joy to the world, all the boys and girls. Joy to the fishes in the deep blue sea, and joy to you and me.

“President Watkins had the ability to add lightness to moments of celebration,” Jones said. “Our University mourns the loss of a scholar, leader and philanthropist who gave so easily of himself.”

His obituary notes that Watkins was preceded in death by his wife of 62 years, Carole R. Watkins ’77, and his grandson, John Brooks Watkins. He is survived by his son, former Cal U staff member John G. Watkins, and wife Amy, of Fallowfield Township, Pa.; daughter Jennifer Watkins ’80, and husband John Soares, of Fredericksburg, Va.; grandson Jacob Watkins, of Fallowfield Township; and four siblings, sister Elizabeth and brothers William, David ’65 and Paul ’64.

The family requests that memorial donations be made to The Foundation for Cal U, 250 University Ave., California, PA 15419, where President Watkins established a library fund in memory of his late grandson. Please put “John Brooks Watkins” in the memo line of your check. Donations will help to provide Cal U students with access to textbooks for English courses.