The recently retired administrator will lead the Homecoming and Family Weekend parade, which begins at noon Oct. 2. 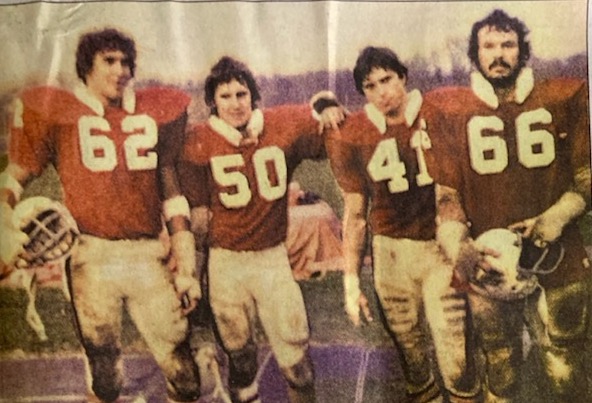 In 1975 four California State College Vulcans football players paused for a photo on their way off the field after the Homecoming game.

The moment is about to get an update, when the men come back to campus Oct. 2 to mark two special occasions.

The first is the retirement of the former No. 66 — a.k.a. Dr. Tim Susick, who left his position as associate vice president for Student Affairs at Cal U in July after a 30-year career. The second is Susick’s honor as grand marshal for California University of Pennsylvania’s Homecoming and Family Weekend parade.

“I was really humbled by the offer from Dr. Dale,” Susick said of the invitation from Cal U’s interim President, Dr. Dale-Elizabeth Pehrsson, to serve as parade leader. “I’m really excited, as a number of my classmates and teammates are coming to help celebrate not only our Homecoming but that they made it through the pandemic.”

“They’re coming in from California, North Carolina, Tennessee, and a lot of the local guys for my retirement celebration,” Susick said. “We hope to re-enact the photo. I even got some red shirts made with our numbers.”

His Cal U pride is evident.

“I had a reputation for hijacking the campus tours,” he said, where he would tell potential students about his affection for the school.

“In 1972, I decided to come to Cal to play football, and soon realized the NFL wasn’t going to be interested in a guy who ran 5.3 in the 40-yard dash. So Elmo Natali took me to the side and tutored me on how to be a successful student.

“I was involved in football and Student Government and theater. Even though I wasn’t talented, but I could swing a hammer and move heavy stuff. I had a lot of fun with it.”

The memories that Larry Sebek, Cal U’s interim vice president for Student Affairs, shared reveal the hilarious part of Susick’s personality and a heart of gold for the students and University.

“Did you ever receive a handwritten thank you note or plagiarized words of encouragement?” Sebek said. “He never passed up a hot dog stand, even after just finishing a full meal. His true stories are funnier than his jokes. Who knew he accidentally ordered 10,000 business cards instead of 1,000 and was able to distribute them!”

But also: “At a time of a campus crisis, he was always a first responder, even at 3 a.m. Tim is a true Student Affairs professional, loving husband, mentor and best friend to many. It is a testament to his legacy to see graduates comes back at Homecoming and thank him for getting them across the stage at Commencement.”

Susick predicts Cal U pride will continue as the University prepares to integrate with Clarion and Edinboro universities beginning in Fall 2022.

“The quality of education will not be diminished, and many of the traditions will remain the same. It’s just a different way of operating.”