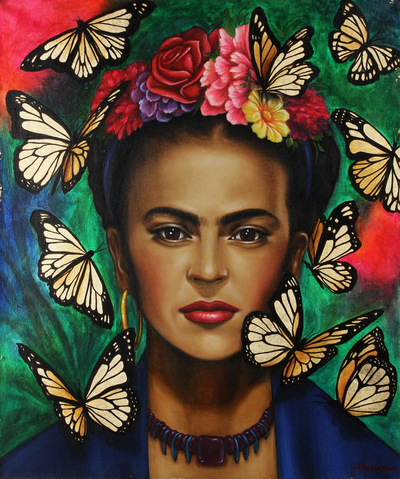 An intense activist, diehard lover of art and her country and the embodiment of willpower, Mexican artist Frida Kahlo is arguably one the most remembered and respected woman of her time. Born in 1907, Frida Kahlo lived during a period when non-white, women, with a disability (Polio) and bisexual, were not well-tolerated by mainstream society. For her, the importance of all of her cultural identities. Her esteem for her cultural identities shows up in her art. Frida Kahlo specialized in self-portraits as well as painting others. She used art as a form of self-expression.

Frida was a member of the Mexicayoti movement, which was made to revive religious and philosophical traditions of ancient Mexico, and her political interest led her to both the Mexican Communist Party and her soon-to-be husband, famous artist Diego Rivera. She had a double portrait of her wedding photo,Frieda and Diego Rivera included in an exhibition at the Palace of the Legion of Honor, and developed one of her most famous works, if not one of the sadder ones to look at to look at, Henry FordHospital in 1932. This painting was a reflection of the pain Kahlo suffered in her birthing process and eventual miscarriage.

After success in the U.S., Kahlo returned to Mexico City, where her career skyrocketed. She produced many new paintings and garnered attention from celebrities and famous artists alike. Kahlo also became a founding member of the Seminario de Cultura Mexico and later became a teacher of the fine arts at La Esmeralda. The later works she made reflected her poor condition and her paintings then were, ironically, still life paintings. Kahlo would eventually pass at the age of 47 in 1954, but her early death didn’t halt the memory of her life. Surprisingly, it was after her death in the ’70s where her legacy and her artwork shined, becoming an absolute icon for people of Mexican descent, feminists, and the LGBTQ+ community.    ~ F. Rivera

For more information on Frida Kahlo: