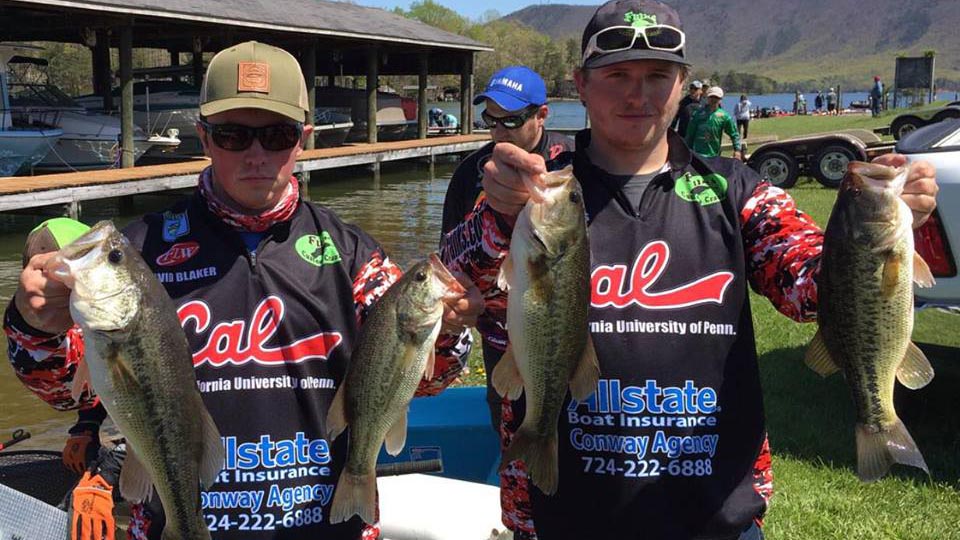 David Blaker (left) and Nick Fulks, at a bass fishing competition in Virginia earlier this year.

After casting their lines in three qualifying events, two members of Cal U’s Bass Fishing Club have landed a big one — a trip to the 2019 YETI Fishing League Worldwide (FLW) College National Championship Tournament — in the organization’s first year.

The club will close out the season at the YETI FLW College Fishing event on Sept. 8 on Lake Erie in Sandusky, Ohio.

It’s an impressive beginning for the club, which last October and whose competition includes Division I schools such as Ohio State, Penn State and Virginia Tech.

“It was very exciting, especially for our first college tournament, and we were obviously pretty happy about it,” said club vice president Blaker, a biology major who’s studying fisheries and wildlife biology.

“Qualifying right away definitely took the pressure off the other two tournaments, and making nationals right away was like an early dream come true.”

Club president Fulks, also a fisheries and wildlife biology student, with a minor in business, says he’s pleased with the club’s first year.

“I have fished the Mon River for years, and it just made sense to start a club here, where there’s a lot of interest. I wasn’t sure at first, but I’m glad we got it started, because it has brought us all together.

“None of us knew each other beforehand.”

This fall the club hopes to use the Mon River and nearby lakes for club tournaments, especially for members who do not have their own boats.

“Having the (Mon) river so close is awesome. It allows us to practice and expand our skills,” said Blaker. “Our club gives students who come to Cal U a great opportunity to learn about fishing and have some fun right here.”

While the club looks to continue making its mark at FLW sponsored events, Fulks emphasized that promoting bass fishing is the priority.

“Even if they don’t want to compete but have an interest, we want students to come talk about fishing, ask questions and we just want to help out,” he said.

“We want to get more and more people outdoors — and what’s a better way to do that then fishing?”

Club adviser Dr. David Argent, a professor in the Department of Biological and Environmental Sciences, said the group seems very enthusiastic about making this club work

“They are willing to drive hundreds of miles at their own expense and compete against longtime established clubs from large schools with sponsors,” he said. “They have certainly held their own in tournaments they have competed in.

“I am excited to be their adviser. I hope they continue adding new members and consider partnering with local alumni who fish.”