The award recognizes a media professional for his or her meritorious service while covering the conference's student-athletes, coaches, and teams. 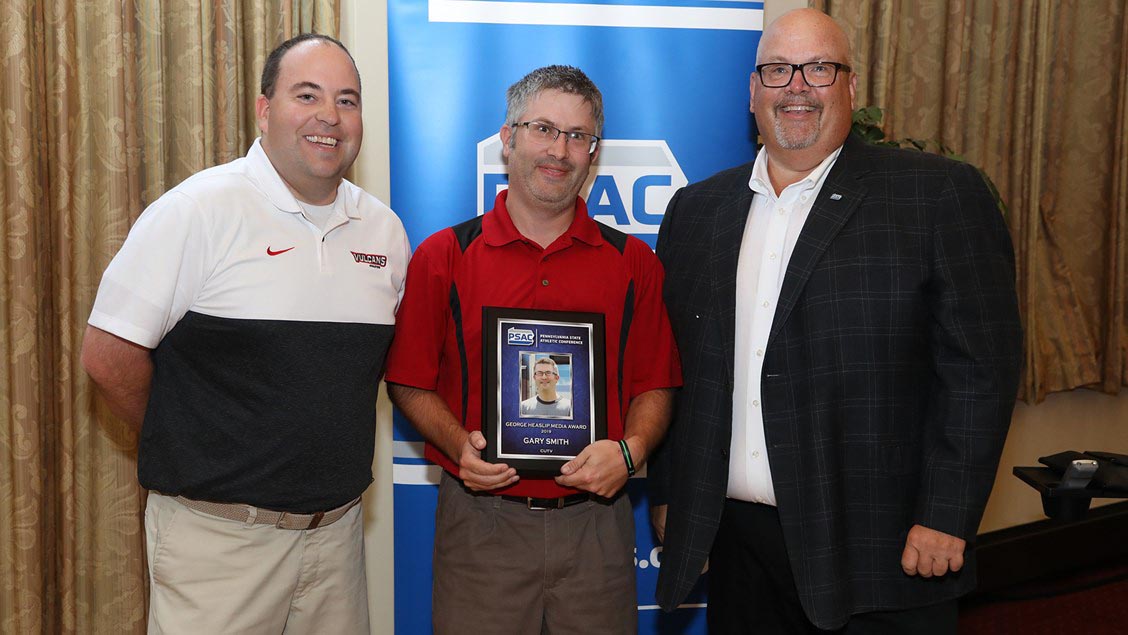 Gary Smith, Director of CUTV operations and adviser for WCAL and CUTV, was presented as the 2019 recipient of the Pennsylvania State Athletic Conference (PSAC) George Heaslip Award at the league's Football Media Day on Aug. 5.

The George Heaslip Award, chosen annually by the PSAC's sports information directors, is named in honor of the late Cheyney University Sports Information Director George Heaslip. The award recognizes a media professional for his or her meritorious service while covering the conference's student-athletes, coaches, and teams. Smith becomes the 31st recipient of the award.

Smith '98, '01 has covered Cal U athletics for more than 25 years through involvement with CUTV and WCAL, the student radio and television stations on campus. He has served as adviser of CUTV for more than 15 years and was appointed adviser of WCAL in recent years.

"This was a tremendous honor, and I am truly humbled by being awarded the Heaslip Award," said Smith. "A part of this award belongs to all the hard-working students who I have worked with over the years. Broadcasting Cal U and PSAC athletics has been the time of my life."

Smith has played a critical role in the recent PSAC Network implementation for Cal U athletics, as CUTV coordinates with the sports information office to ensure live video and audio coverage of league football, volleyball and basketball contests on the platform.

“Gary Smith and his student have been extremely helpful in helping our conference develop its identity,” said Will Adair, associate commissioner for the PSAC. “We are able to draw on the experience of CUTV to expand our coverage and the PSAC is very fortunate to be able to utilize the resources provided by CUTV.

“Through Gary’s leadership CUTV is a tremendous asset for us.”

Additionally, Smith oversees a YouTube page for CUTV that contains nearly 1,000 different videos. He has served as director and on-air talent for several in-studio shows featured on the YouTube page, including weekly coaches shows for football and basketball.