The Cal U station is recognized as the Best College Radio Station Under-10,000 Students. 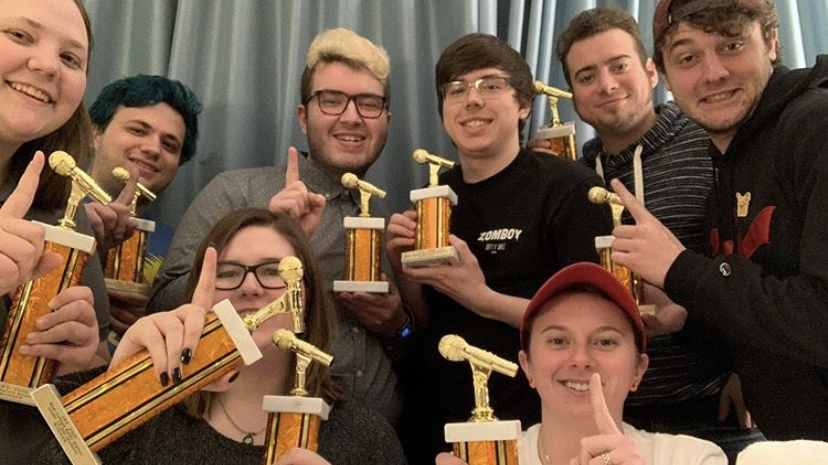 How good is 91.9 FM WCAL, the University’s campus radio station?

The best, according to the Intercollegiate Broadcasting System.

Listen to WCAl at 91.9 FM or online sai.calu.edu/wcal.

IBS is an organization with a membership of over 1,000 non-profit, education-affiliated radio stations and webcasters. Founded in 1940, IBS provides support for establishing and operating noncommercial radio and webcast operations, and represents its members with FCC negotiations, copyright issues, and litigation.

“It’s something we’ve been working toward for a few years and to even be nominated let alone win is a really big thing for us,” said senior Rebecca “Becca” Glusco, WCAL program director, who became a certified disc jockey during the first week of her freshman year. “As soon as they announced our name we were super excited and even giddy because to be recognized on such a big level shows we are doing something right to be successful.”

Hixenbaugh and Caitlin Lenkey won the underwriting award for an ad they wrote about the Smithfield, Pa.-based Fright Farm haunted house. Alumnus Eddie Kuntz ‘19 won the interview award for his work with the Little Jake Band at Cal U last spring.

"I am very happy with everything that we as a station have done over these past two years that I have been here," said Keteles, WCAL's operations director who is majoing in management of information systems with a minor in communication studies/broadcasting.

"Of course, there is always room to improve and make our station bigger and better. We look to do that each and every year as we move forward."

“WCAL has transitioned more into a radio station from a club by reinstituting format hours,” he said. “We call it a college variety format, and the DJs are really taking to it. “It brings us back to more of what a professional station is, and people get a better feel for what the tone of the station is.

“We have the structure now, which I really think helped put us over the edge with the IBS.”

The formatted programming generally runs from 11 a.m. to 7 p.m., allowing the DJs plenty of creativity, especially in the early morning and evening hours.

WCAL submitted a compilation of on-air highlights, and the IBM awards committee also listened to the station without notice.

“Our DJ’s had to have their A-game 24/7, but we really have a lot of great and unique personalities on the air,” Glusco said. “We also thought the formatting program would set us apart because a lot of college stations do not do that.”

“Being on radio really helps me to find my teacher voice and have the confidence in myself,” she said. “If I can be comfortable talk to people I can’t see and don’t know, I can definitely do the same thing in a classroom setting.”

WCAL broadcasts at 3.3 kilowatts from a media suite in the Natali Student Center, where a new award proudly sits.

“To have such a reputable and big organization say that you’re the best certainly speaks volumes of our students and the work they are doing at WCAL,” Smith said. “They’ve worked very hard, are deserving of this prestigious honor, and I know they will just look to keep getting better.”