Cal U Students Reach Out

Students find ways to give back to their communities despite challenges and restrictions during the pandemic. 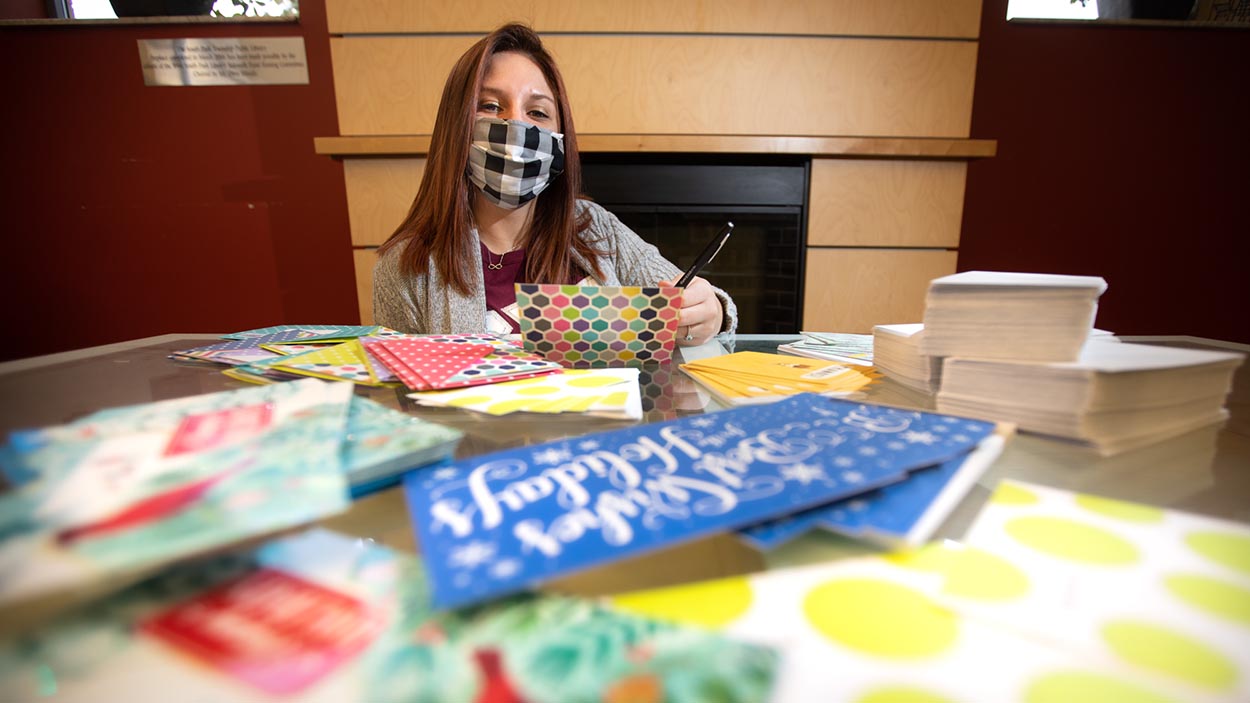 Volunteering looks somewhat different this year as we keep each other safe through social distancing — and Cal U students have continued to serve their communities and reach out to those in need this fall, adapting volunteer work and charitable fundraisers to remote settings.

“It’s a crucial time to be volunteering, even reaching out to a neighbor,” said Hannah Cook, a senior communication disorders major.

As vice president of service for the Cal U chapter of the Gamma Sigma Sigma (GSS) service sorority in 2020, Cook helped identify and implement service opportunities for the group’s volunteer and philanthropic efforts this year.

This included everything from sending cards to veterans and individuals in nursing homes to painting rocks with positive messages that they placed throughout their neighborhoods. The group also hosted a virtual paint-and-sip fundraiser that benefits the National Coalition of Homeless Veterans.

“People think of service as these big elaborate gestures,” said Cook. “Service is making an impact on an individual. Making someone else’s day is service.”

Sending Letters to Loved Ones

As they wrap up the semester, Cook and nine other GSS members are also participating in a campus-wide initiative to send cards to individuals in nursing homes or who are homebound.

The card-writing project is being led by Meghan Larsen-Reidy, the Catholic campus minister at Cal U, as a way to reach out to older individuals who are isolated and aren’t able to see their families as much because of the pandemic.

Larsen-Reidy knew that feelings of isolation and loneliness are also common among college students right now. She thought that the card-writing project might be a good way to connect the two groups.

Over 90 Cal U students signed up to each send between five and 20 cards. Through the project, almost 100 people will each be showered with at least 10 cards.

Nicholas Morrison, a senior communication disorders major, signed up to send 20 cards. He was inspired to participate because of a recent internship experience at a nursing home.

“Many of the residents’ families have not been able to see them due to Covid-19,” he explained.

Members of Sigma Tau Gamma are also participating — seven of the brothers will send a total of 45 cards. In the spring, the fraternity increased the number of service hours each brother would complete in a semester, but COVID has limited what they’ve been able to do.

“Seeing an opportunity we could do no matter where we were located, we had to jump on it immediately,” said Elijah Doebler-Wyland, a sophomore digital media technology major who serves as the group’s president.

Supporting a Good Cause

Other groups, such as the Cal U chapter of the Delta Zeta sorority, have also reached out to shut-ins through other letter-writing initiatives this semester.

“During this time, people are very down,” said Taylor Assad, a senior health science major and a member of Delta Zeta who wrote letters. “I think it’s very important to lift people up. Writing those letters can change a person’s day.”

In addition to reaching out to individuals in nursing homes, the sorority raised money for the Starkey Hearing Foundation this semester by reselling clothes online and hosting virtual dance workout classes.