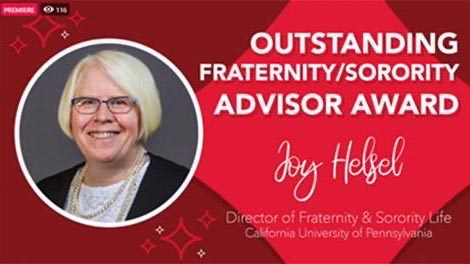 The award recognizes a campus professional for exceptional service to Alpha Sigma Alpha, which has 175 chapters and 120,000 members nationwide, and to the campus community.

Recipients exemplify the core values of Alpha Sigma Alpha, serve as a role model for students and make outstanding contributions to fraternal life.

“I am humbled and honored by this award,” Helsel said. “Our Greek community at Cal U is very dedicated to being good students and citizens. To be recognized for doing something I love to do is hard to put into words.”

Jessica Bridwell Wright, ASA’s national vice president, announced Helsel’s award during a Facebook Live event, held in place of the organization’s national conference, which was postponed due to the pandemic.

She praised Helsel as a valued partner and source of information for Cal U’s Epsilon Upsilon ASA chapter and for volunteering as a workshop facilitator at ASA’s regional leadership conference.

“In her 33 years as a campus administrator, Joy has developed meaningful relationships with the students by consistently encouraging their learning, involvement, and safety,” Wright said.

“She prides herself on knowing all members of the Greek community as a way for students to know someone is there for them during their college years.”

A Sigma Kappa sister and Cal U alumna, Helsel earned her bachelor’s degree in speech communication in 1983 and master’s in communications in 1986.

Helsel is also a member of the Association of Fraternity/ Sorority Advisors (AFA) and past chair of Pennsylvania’s State System of Higher Education’s Student Affairs Conference Committee.

“Joy has supported us and has significantly helped make our sorority as successful as it is,” Moffit said. “She has gone out of her way to make connections with each individual sister, and her dedication to the entire Greek community is a quality that only few possess.

“Personally, she has helped me through my different positions, and I am so lucky to call her my Greek life adviser, my mentor and my friend.