The 10 newest members were honored April 23. 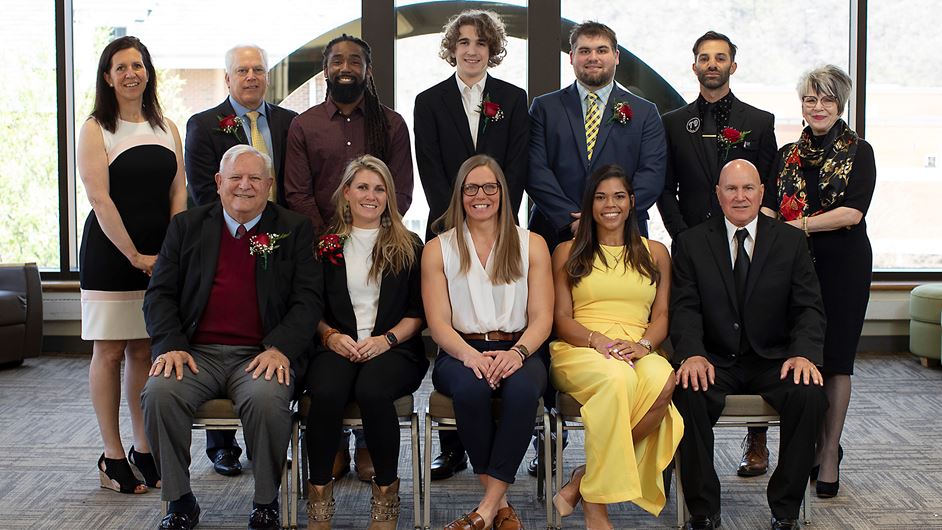 California University of Pennsylvania inducted 10 members into the Athletic Hall of Fame, encompassing members of the 2020 and 2021 Classes, at a banquet on Saturday morning in the Performance Center of the Elmo Natali Student Center.

DiMatteo (Center, Pa./Center) earned multiple All-America honors in his final two seasons and was a three-time all-conference outfielder from 2007-10. He helped the Vulcans win the 2010 PSAC Championship and was named the league tournament's Most Valuable Player. He still owns the PSAC career record with 115 stolen bases and also held all-time school records with 223 hits (now second) and 175 runs scored (tied first). DiMatteo finished with a .375 career batting average and his 31 home runs and 161 RBI rank second and third in school history, respectively.

Johnson (Braddock, Pa./Woodland Hills) earned multiple All-America accolades over his final two years and was a three-time all-conference selection at defensive back from 2006-09. He finished his career with 16 interceptions while leading the Vulcans in the category in each of his four seasons. Johnson helped the Vulcans compile a 44-10 cumulative record with four-straight PSAC West titles and three-straight appearances in the national semifinals of the NCAA Playoffs.

Luckhardt (Pittsburgh, Pa./Chartiers Valley) served as the football team's head coach from 2002-11. He is Cal U's winningest coach in program history with an 88-33 cumulative record and a .727 winning percentage. Luckhardt concluded his Cal U coaching career by guiding the Vulcans to five-consecutive seasons of double-digit victories and the program's first five NCAA Playoff appearances, which included three-straight trips to the national semifinals. Cal U won or shared the PSAC West title in each of his final seven seasons.

Silva Gray (Sao Paulo, Brazil/Colegio Ateneu) received multiple All-America honors in each of her final three seasons and was a four-time all-conference setter from 2006-09. She holds the all-time school record and ranks fifth in PSAC history with 5,507 assists. The 2008 and 2009 PSAC Tournament Most Valuable Player, Gray helped Cal U compile a 111-12 cumulative record and a 41-0 conference mark over her final three seasons with three-straight PSAC Tournament and NCAA Atlantic Regional Championships. In 2009, she became the volleyball program's first Academic All-American.

Snyder (Pittsburgh, Pa./Bishop Boyle) was a three-year starting defensive back from 1981-84. He was a first-team all-conference safety twice and earned Associated Press All-America honors in his senior year. Over his last three seasons, Snyder posted 220 tackles with 14 interceptions and 23 pass break-ups During that 1984 season, he helped the Vulcans win their first PSAC Championship in 16 years and compiled the team's most victories since 1958.

Heister-DelGreco (Palmyra, Pa./Northern Lebanon) was a prolific forward from 2006-09 and was selected the PSAC West Athlete of the Year as a senior. She helped the Vulcans make their first-ever appearance in both the PSAC and NCAA Tournaments in 2009, advancing to the national quarterfinals of the NCAA Tournament. Heister-DelGreco led the PSAC with 19 goals and 42 points as a senior and was a first-team all-region selectin by both the NSCAA and Daktronics. A four-time All-PSAC West selection, Heister-DelGreco holds all-time school records of 44 goals and 107 points. She is one of just two players to eclipse the century mark in points.

Kalocay (Bethel Park, Pa./McKeesport) was a standout pitcher for the Vulcans and a two-year team captain in the 1960s. He helped the program advance to the NAIA National Tournament in Saint Joseph, Missouri, in both 1962 and 1963. Kalocay posted a 4-0 record with a 1.29 ERA as a sophomore and finished his career with 18 victories, winning at least four games each season. Kalocay passed away on July 29, 2020. His grandson Andrew Hogg accepted the honor in his memory.

Laskey (Dunlevy, Pa./Charleroi) was the head coach of the men's soccer team from 1984-88 and 1991-2012, in addition to serving as the head coach for the women's soccer team from 1990-2001. He is the all-time winningest coach in school history in both sports, posting a 258-223-41 mark with the men's program and an 89-123-13 record with the women's team. Laskey ranks second in PSAC men's soccer history in victories. He led the program to PSAC Championship appearances five times, highlighted by the program's first league title in 2008. Laskey also guided the men's soccer program to a berth in the NCAA Tournament three times in eight years from 2004-11.

Smith (Elkins, Pa./Elkins) was a dominant forward from 2006-2011 and received All-America status three times. She helped Cal U capture NCAA Atlantic Regional Championships in 2007 and 2008 before being selected the 2011 PSAC West Athlete of the Year. Smith led the league and ranked among the top five in the country in rebounds per game in each her last two seasons. Smith holds the all-time school record with 1,309 rebounds and ranks third with 2,096 points. She is just one of eight players in PSAC history – three from Cal U – to finish with more than 2,000 points and 1,000 rebounds in a career.

Sturgill (Leechburg, Pa./Leechburg) was a standout pitcher from 2008-11 and received multiple All-America honors in his final two seasons. He was the ace of the Vulcans throughout his career, as the program captured the PSAC Championship in 2010 for just the third time in program history. Sturgill led the league in strikeouts in his each of his last two years and was chosen the PSAC West Pitcher in Year in both 2010 and 2011. Sturgill holds the all-time school record with 23 victories and ranks second with 241 strikeouts despite playing just three seasons. He also ranks among the top five in school history with a 2.88 ERA and 16 complete games in his career.